Women are the agents of change in driving the climate agenda forward: Rania A. Al-Mashat 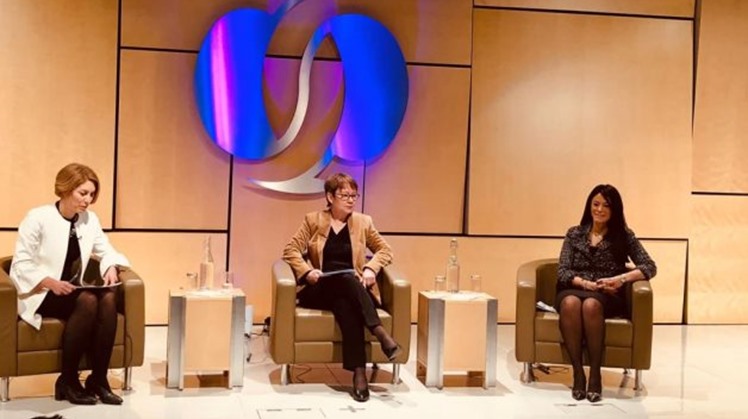 Wed, Mar. 9, 2022
CAIRO - 9 March 2022: Egypt's Minister of International Cooperation, H.E Dr Rania A. Al-Mashat, said on Wednesday that “Women are the agents of change in driving the climate agenda forward,” during a fireside chat with EBRD’s President Odile Renaud Basso in a hybrid event held at EBRD’ auditorium in London on the occasion of this year’s International Women’s Day.


Advancing gender equality in the context of the climate crisis is one of the greatest global challenges of the 21st century, as women are more disproportionately affected and more vulnerable to the effects of climate change, particularly in the agriculture sector where women are regarded as the backbone of the sector, representing 45 percent of women in the workforce.


Nevertheless, the Minister noted that women and girls are recognized as effective change-makers for climate adaptation and mitigation, as women are at the forefront of climate change decision-making in their homes through either recycling used cooking oil, crop production and reducing food waste.


The Minister added that improving gender equality contributes to policy choices that lead to better environmental governance, as there are opportunities for the private sector to be enhanced through bridging technological gaps for rural women so that more women can be engaged in the green transition and promote inclusive climate action.


Under a strategic umbrella based on a holistic scheme of inclusive-green-digital nexus, the Minister noted that the issue of gender has been at the forefront of every discussion with other stakeholders. “In the age we live in today, we are always prone to crises, whether it's a conflict or a pandemic, and for that reason, the international community and the private sector must come forward in realizing the importance of gender component to design comprehensive strategies, as women’s participation is macro-critical,” she said.

People always want to see success stories because it gives hope and motivation, the Minister said, which is why Egypt has been keen on showcasing its success stories to the international community, creating a ripple effect for more inspiring stories to be replicated globally.

Since the beginning of the COVID-19 pandemic, Egypt was the first country to issue a policy paper titled “Egypt’s rapid response to women’s situation during the outbreak” and a Women Policy Tracker on responsive policies, which has been highlighted by UN Women, the Minister noted.

Localizing the SDGs, as part of the call for “glocal” (global/local) action to prepare for the Decade of Action, necessitates the need for effective monitoring and implementation. The Ministry’s ​​model of ODA-SDG mapping ensures that adequate gender financing from a variety of development partners is directly channeled to achieve the objectives of gender equality, which strengthens the collection of gender disaggregated data and improves accountability.

The Minister added that each and every stakeholder, be it the government, the private sector, the development community, or civil society, is regarded as a key ally in the journey in order to create the right infrastructure and ecosystem that is critical to achieving gender equality. She added that COP27, which will be held in Egypt’s Sharm El-Sheikh, can become a key moment for gender-responsive climate action.

Egypt’s local startup ‘Tagaddod’ is an example of inclusive climate action through the participation of Egypt’s private entrepreneurs, which is a pioneering renewable energy and waste management startup that enables waste collection through tech-based solutions.

For her part, Odile Renaud-Basso, EBRD’s President, commended the Ministry of International Cooperation’s role in fostering effective cooperation that helps in defining the role of each development partner to deliver its gender objectives.

She added that the EBRD is focused on linking climate change and gender equality as key priorities. “It is not just for the sake of gender equality, but it is fundamental for the success of the green transition, having women fully on board is absolutely needed if we need to succeed in that.”

The event coincides with the launch of the new country strategy between Egypt and the EBRD, which sets out a comprehensive framework of development cooperation that is based on a holistic scheme of inclusive-green-growth nexus and promoting equal opportunities for women and girls.

Promoting gender mainstreaming in all aspects of development, the strategy is a combination of green growth and inclusive growth objectives, which is a novel development model that enables Egypt to embark on the path towards more comprehensive sustainable development.

Since 2013, EBRD has signed 52 inclusive or gender additional investments in Egypt, totalling to over €2.62 billion in investment amount, which include promoting green jobs for women, increasing women’s employment and participation in decision making roles, as well as in governance.

Examples of EBRD’s projects include the Women in Business programme in Egypt, which has provided opportunities for many women , thirty four percent of small Egyptian businesses accessing their advisory projects were women-led