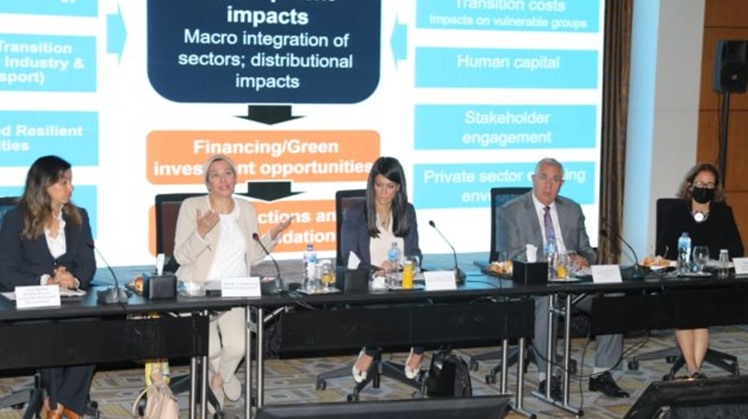 This came within the framework of the Annual Meeting of the Boards of Governors of the World Bank Group (WBG) and the International Monetary Fund (IMF).

H.E. Al-Mashat discussed with the World Bank’s leaders Egypt’s efforts to recover from the COVID-19 pandemic; in preparation for the schools’ season by vaccinating workers in the education and higher education sector, as well as to start manufacturing and exporting vaccines in a way that enhances the international community’s efforts to increase vaccination rates. The Minister also touched on Egypt’s efforts to develop the healthcare system through the Universal Health Insurance System (UHIS). The Minister further delved into the World Bank’s role in supporting Egypt’s strategy within this framework.

The Minister applauded the Upper Egypt Development Program, which was implemented in cooperation between the Government of Egypt and the WBG; expressing that it counts as a successful model of developing rural communities and has been selected by the United Nations among the best practices that achieve sustainable development.

In that same vein, Al-Mashat addressed the Development Policy Financing framework that the Government of Egypt works on in cooperation with the WBG, which pushes forward the second phase of the structural reforms to achieve economic growth; based on three pillars: enhancing financial sustainability, pushing for green recovery, enhancing private sector’s engagement in development efforts, and enhancing women’s engagement in the economy. The Minister further noted that this project needs to be finalized in the upcoming period in order to support national efforts to attain development.

H.E. reiterated the International Financial Institutions’ (IFIs) keenness on seeking innovative financing and blended financing tools to support Egypt’s efforts towards green transition and achievement of the UN’s SDGs; emphasizing that traditional financing tools are no longer the most important tools for the time being.

Minister Al-Mashat stated that Egypt has drawn attention to these types of funds, as it has issued $750 million in green bonds last year; in what was the region’s first sovereign offering of climate-friendly securities. This is in addition to green and Islamic financings that come in light of enhancing Egypt’s efforts to achieve development. H.E. referred to the roundtable discussion that was held with Vice Chairman, Corporate and Investment Banking at Citibank, Mr. Jay Collins on ‘Innovative Tools for Sustainable Development.

Furthermore, Al-Mashat. noted that the final recommendations of the Egypt — International Cooperation Forum (Egypt — ICF) in the Cairo Communiqué, encouraged the formulation of multi-stakeholder task forces and working groups that aim to outline innovative sustainable financial instruments that deliver socio-economic and environmental impact; and promote partnerships between the private sector and civil society.

Minister Al-Mashat shed light on the importance of deepening cooperation with the WBG in the upcoming period; adding that this cooperation aims to strengthen the development portfolio in a way that meets the needs of priority sectors. H.E. noted that financial inclusion is among the most important areas that the partnership with the WBG works on bolstering.

For his part, World Bank’s Managing Director of Operations, Axel van Trotsenburg stated that supporting countries in reforming the healthcare system comes at the priority list of the WBG, to enable them to overcome the COVID-19 pandemic’s repercussions and to increase vaccination rates. Hence, he reaffirmed the WBG’s keenness to support Egypt’s efforts in that respect.

Trotsenburg further added that Egypt’s hosting of the UN COP 27 reflects the country’s regional leadership progress towards green transition; noting that Egypt is the first country in the region to participate with the World Bank Group in developing a climate change strategy through joint cooperation in preparing the country's climate and development report.

For his part, the WBG’s Vice President, Middle East and North Africa, Ferid Belhaj, praised the efforts of the Government of Egypt in implementing structural reforms, and applauded the ministries’ commitment in implementing the Development Policy Financing framework in cooperation the World Bank Group.

It is worth noting that the ongoing development cooperation portfolio with the World Bank amounts to $5.8 billion to finance 18 projects across various sectors, including education, health, transportation, social solidarity, petroleum, housing, sanitation, local development, and environment.