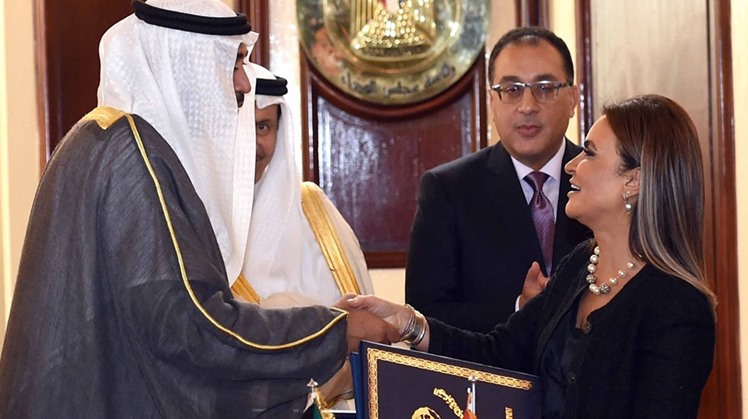 They also signed an agreement to fund Al-Nafaq road between Egypt and Sinai's Sharm El-Sheikh by $86 million.

Egypt's Prime Minister Mostafa Madbouly and his Kuwaiti counterpart Sheikh Jaber Al-Mubarak has witnessed the signing ceremony of these agreements of cooperation between the two countries.

The two sides also signed an agreement to finance Egypt's second phase of the Sinai Peninsula development project by $1 billion within three years.

Nasr and Khaled Al-Roudan, Kuwait's minister of service affairs and also minister of commerce and industry, also signed a memorandum of understanding to encourage foreign direct investments between the two ministries, along with Kuwait Direct Promotion Authority.

Received by Egypt's Prime Minister Mostafa Madbouly, the Kuwaiti Prime Minister on Sunday praised the historical relations and the level of joint cooperation between Egypt and Kuwait, as he arrived in Cairo in an official visit.

In a statement, Sheikh Jaber Al-Mubarak said that his visit comes within the framework of continuous consultation and permanent coordination between the two countries in various fields and issues of common concern.

He highlighted the significance of this current visit due to the changes and challenges witnessed by the Arab nations and the world, which require joint action to achieve stability, security and peace in the Middle East.

Sheikh Jaber Al-Mubarak expressed hope that this visit will be a good opportunity for both countries to reach new levels of fruitful and constructive cooperation in political, economic, cultural and tourism fields and develop them in line with the aspirations of the brotherly peoples of the two countries.