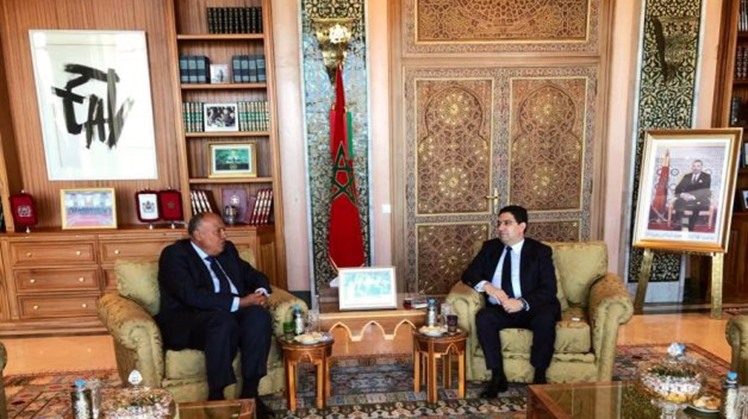 Mon, May. 9, 2022
CAIRO – 9 May 2022: Egypt's Foreign Minister Sameh Shoukry held a meeting with his Moroccan counterpart, Nasser Bourita, on Monday during the former’s official visit to Rabat.

During their meeting, the two ministers reviewed boosting bilateral relations between Egypt and Morocco and also discussed regional and international issues of mutual concern, the Egyptian Foreign Ministry said in a statement.

According to an earlier statement by the ministry, Shoukry’s bilateral visit to Rabat seeks to enhance the firm brotherhood and cooperation relations that gather the two countries.

During the visit, Egypt’s top diplomat will hold a series of meetings with Bourita and a number of other senior officials in Morocco, which would aim to boosting bilateral relations between the two countries in all realms, the ministry said.

This includes especially the economic and commercial relations, the ministry noted, in a way that meets the interests of the two countries and their peoples’ aspiration toward further development and prosperity.

Minister Shoukry will discuss with the officials in the sisterly country the developments on the international level and will hold consultations with them regarding regional and Arab issues within the framework of coordinating efforts and exchanging visions to protect the resources of the Arab national security.

This is in addition to pushing forward efforts to prioritize political solutions to the issues of the region and establishing the pillars of security and stability in the region.

During his visit, Shoukry is also set to inaugurate the new premises of the Egyptian headquarters in Rabat