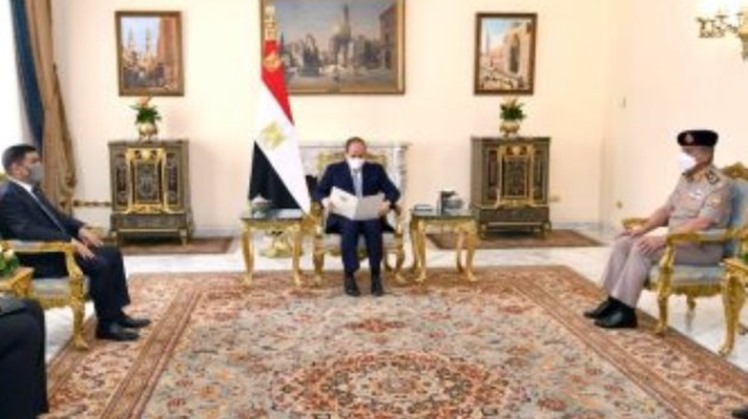 Sun, Aug. 8, 2021
CAIRO - 7 August 2020: Under the Egyptian policy's constants, Egypt supports Iraq, enhances its Arab national role, offers all the requirements needed to achieve the interests of Iraq and its people at various levels, also helps Baghdad overcome all challenges, combat terrorism and maintain its security and stability, Sisi affirmed in a meeting with Iraqi Defense Minister Juma Anad Saadoun in Cairo on Saturday.

The meeting was attended by General Mohamed Zaki, Commander-in-Chief of the Armed Forces, Minister of Defense and Military Production.

In his letter, Kadhimi expressed appreciation for the Egyptian efforts in support of Iraq at all levels, and aspiration to promote cooperation frameworks with Egypt to benefit from its inspiring success experience led by President Sisi in the development field.

He also praised the Egyptian role in support of Iraq as a "strategic depth for the Arab nation, especially with regard to confronting common challenges, foremost of which is combating terrorism and achieving security, stability and development."

It also tackled Arab and regional issues and files of common interest.