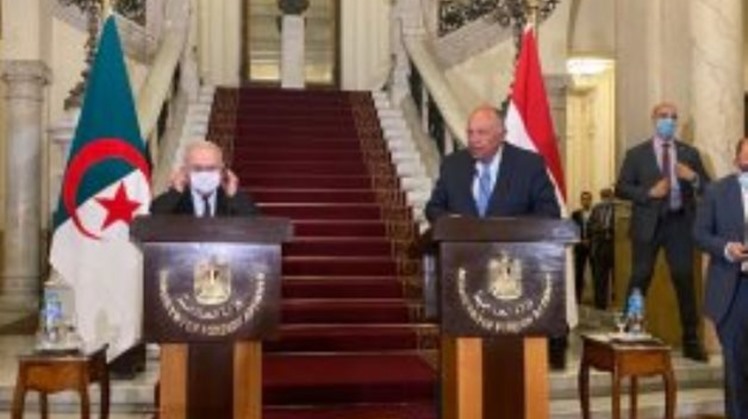 This came at a press conference held on Saturday following their talks in Cairo, where Lamamra is on his first visit to Egypt. They also underscored good coordination between the two countries on issues of common interest.

Shoukry said the talks touched upon means to cement ties and several regional and international issues of mutual concern.

Both sides agreed on continuing consultations to help bring peace and stability in the Arab and African regions.

The message focuses on the need to enhance historic ties between Egypt and Algeria, Lamamra reiterated, lauding Cairo’s ongoing support for Algiers.

On his visit to Ethiopia and Sudan and the issue of the Grand Ethiopian Renaissance Dam (GERD), Lamamra said the dam crisis is at a critical stage, noting Algeria thinks it would be better to reach an agreement satisfactory to Egypt, Sudan, and Ethiopia to serve and secure the rights of their peoples.

He pointed out that Algeria is keen on taking part in settling this crisis and other issues in the region.
Concerning the developments in Libya, Shoukry said Egypt and Algeria had a keen interest in the situation in the North African country and are working on restoring security and stability there.

"We are optimistic the Libyan Political Dialogue Forum would contribute to holding the elections and expelling the foreign troops and mercenaries," Shoukry noted.

Shoukry said he is looking forward to furthering cooperation to restore stability in Libya.

Simultaneously, Lamamra said the Libyan arena had witnessed progress compared to the previous ordeals it had gone through, wishing the Libyan elections will help restore security and stability.

Lamamra pointed to coordination with Egypt on the situation in Libya.

In Tunisia, the top Algerian diplomat said what is going on in Tunisia was a domestic affair, saying: "We respect Tunisia's sovereignty and stand with the Tunisian people."

The Tunisians will overcome this period; he underlined, pointing out that procedures will be taken to place the country on the right track.

Meantime, Shoukry said Egypt closely follows up on the Tunisian authorities' measures to achieve stability and security, voicing his trust in the political leadership's wisdom to manage the situation well.

As for Lebanon, the foreign minister stressed Egypt contributed to getting Lebanon out of its current crisis, although it is a domestic issue.

He wished the political leadership would meet the Lebanese people's needs and aspirations and form a government that can interact with the international institutions.

Egypt will offer support to achieve security and stability for the Lebanese people, he added.

US fully backs Egypt on need for withdrawal of mercenaries from Libya: State Department Wed, Nov. 10, 2021