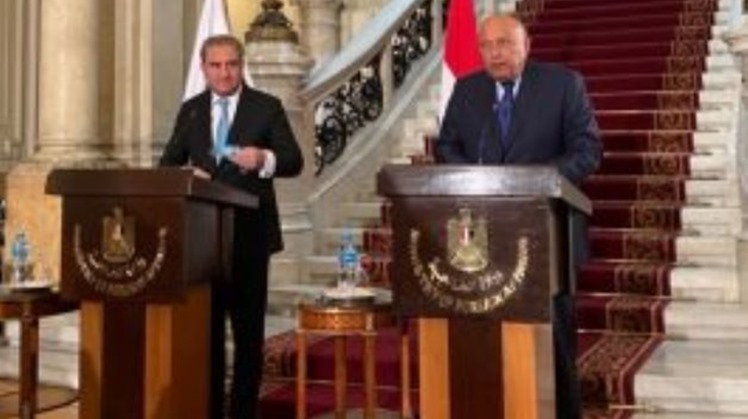 Wed, Feb. 17, 2021
CAIRO - 17 February 2020: Egypt's Foreign Minister Sameh Shoukry stated that Cairo played a role in sponsoring the peace process and the ceasefire between the Libyan parties, stressing Cairo’s coordination with the countries concerned with the Libyan issue to maintain prolonged efforts aiming at preserving Libya’s unity and holding elections by the end of 2021.

He affirmed the continuity of contact and cooperation between the Egyptian government and the UN envoy to address the crisis.

Earlier, in a joint press conference with his Pakistani counterpart, Shoukry confirmed that the Egyptian delegation's recent visit to Tripoli aimed to discuss opportunities for resuming the work of the Egyptian Embassy in Tripoli and the Egyptian consulate in Benghazi, confirming that Egypt will spare no effort in supporting the Libyan people.

He indicated that Egypt and Libya faced challenges represented in terrorism due to the security situation and the military conflict, explaining that Egypt has no self-interest in Libya and is working to establish normal cooperation in all fields with the neighboring country.

Egypt's FM pointed out that Egypt will continue to interact positively with the United Nations and the Security Council to hold elections in Libya at the end of this year, indicating the parties do not adhere to the date specified in the Skhirat Agreement, unlike the last agreement.