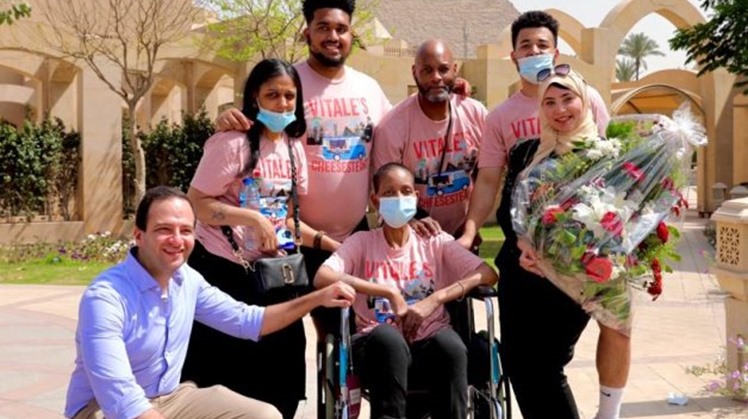 Thu, May. 13, 2021
CAIRO – 12 May 2021: The U.S. embassy in Cairo offered thanks to The Coordination’s Committee of Party’s Youth Leaders and Politicians (CPYP) , and everyone else who played a part in achieving Mrs. Gloria Walker dream of visiting the Pyramids of Giza.

“Sometimes dreams do come true. Thanks to the son’s tireless fundraising efforts as well as Ministry of Tourism and Antiquities, The Coordination’s Committee of Party’s Youth Leaders and Politicians, and everyone else who played a part in this dream-come-true initiative.” The U.S. embassy in Cairo stated in its Facebook page, Wednesday.

On May 10, Minister of Tourism and Antiquities, Khaled El-Enany, meet with American Mrs. Gloria Walker on the first day of living her dream of visiting the Pyramids of Giza, where the minister received her at the Sphinx paws, which was opened exceptionally for her.

In front of the Sphinx, The Minister of Tourism and Antiquities and Ms. Gloria Walker exchanged talks, where Dr. El-Enany welcomed her, thanking her for her love and passion for Egypt and its ancient civilization, expressing confidence that her visit to Egypt will give her positive energy to help her recover quickly.

Gloria Walker said she was happy to meet the minister who was keen to meet her, thanking him for what the ministry had done to enable her to make her life wish to visit the Pyramids.

She also expressed her great happiness with the hospitality that the Egyptian people have treated her with since her arrival.

In front of the Sphinx, Gloria insisted on standing from her chair to fulfill her dream and take a commemorative photo of her in front of the great Sphinx.

The minister asked Gloria whether she would visit Upper Egypt, where she replied that the tourism program of the visit did not include this. The minister invited her to visit Luxor governorate and enjoy its unique Egyptian monuments, which will provide her with an opportunity to learn more about the ancient Egyptian civilization.

Mrs. Gloria Walker welcomed the offer, and the minister directed the ministry to coordinate with the organizing company to extend her and her family's visit to Egypt for one day during which she will visit Luxor.

At the end of the meeting, the Minister of Tourism and Antiquities gave her a replica of the goddess Ma'aat, the goddess of justice and truth, to put her in her home in Philadelphia to remind her always of her visit to Egypt.

During her visit to the Pyramids, Mrs. Gloria Walker was accompanied by representatives of the Coalition of the youth of political Parties, who have been with her and her family since the beginning of her journey from New York Airport on May 5th and will stay with her until the end of their visit.

Gloria began her visit to Egypt yesterday after arriving from Philadelphia, USA, to live the dream of her life, which is to visit Egypt and watch the Pyramids of Giza with her family.

Over the past few years, Gloria Walker has been the focus of the world's attention, with many international and regional media reporting her story widely, when her son Dustin Vitali revealed on his Facebook page that his cancer-stricken mother wanted to visit Egypt and watch the Pyramids of Giza.

Mrs. Gloria Walker and her family's trip to Egypt is scheduled to take a week, including visiting the most important tourist and archaeological attractions in Cairo and South Sinai provinces.

It is worth mentioning that Mr. Ahmed Youssef, CEO of the Egyptian Tourism Promotion Board, received her and her family on Saturday morning from Cairo international airport.