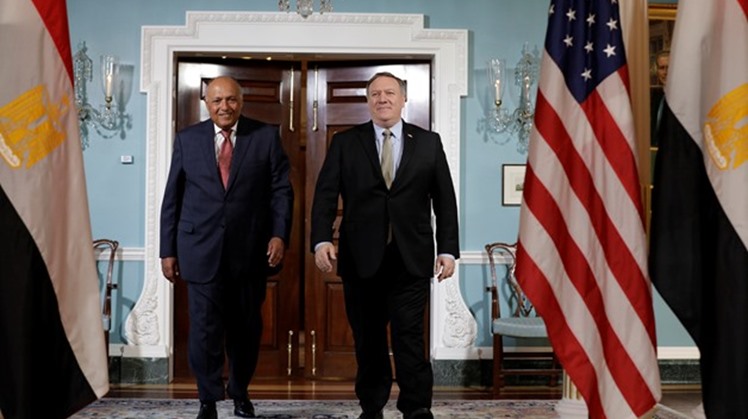 Thu, Apr. 23, 2020
CAIRO – 23 April 2020: Egypt’s Foreign Minister Sameh Shoukry discussed updates about the spread of coronavirus (COVID-19) with his American counterpart, Mike Pompeo, and the national efforts to mitigate the effect of the pandemic on economy, the Egyptian Foreign Ministry said on Thursday.

In a phone call, Pompeo thanked the Egyptian side for an initiative to provide the United States with medical aid to contribute to facing coronavirus, saying it indicates strong friendship relations between the two countries.

This comes as the United States has reported almost 856,000 coronavirus cases and more than 48,000 deaths, according to Worldometers, which makes the highest toll among countries worldwide.

Shoukry and Pompeo reviewed a number of regional issues of mutual concern, including the updates of the Grand Ethiopian Renaissance Dam (GERD).

Egypt and Ethiopia are at loggerheads over the $4-billion dam; Cairo voiced concern over its water share [55.5 billion cubic meters] after Ethiopia started building the dam on the Blue Nile in May 2011. A series of tripartite talks between the two countries along with Sudan began in 2014. One year later, the three countries signed the Declaration of Principles, per which the downstream countries [Egypt and Sudan] should not be negatively affected by the construction of the dam.

The United States has announced it will continue to work with Egypt, Ethiopia and Sudan until they sign an accord on the hydropower dam, according to U.S. Treasury Secretary Steven Mnuchin.

The Place and The People: An Initiative by Egyptologist Fatma Keshk to Exploring Egypt's intangible heritage Thu, Aug. 13, 2020

Restoration of Cairo Citadel Aqueduct or Mamluk Aqueduct to be finished in 2021 Mon, Aug. 10, 2020
The Return of 2 royal statues to Egypt for display at Grand Egyptian Museum Thu, Aug. 6, 2020
Egypt’s Zahi Hawass: ‘’25 foreign ambassadors in Egypt I consider to be the ambassadors of queen Cleopatra Sun, Aug. 9, 2020
In a 30 min feature CNN goes behind the scenes of the Grand Egyptian Museum Sun, Aug. 9, 2020
In Pics: The magnificent ancient Egyptian antiquities housed in the Antiquities Museum in Bulaq for 160 years Mon, Aug. 10, 2020
Egypt: Museum of Modern Art contains rare treasures that express the identity of the nation Mon, Aug. 10, 2020
Ancient Origins: Decrypting the Temple of Edfu and the Edfu Texts Mon, Aug. 10, 2020
In Letter to AU, Egypt asserts total rejection to Ethiopia’s unilateral acts on GERD Thu, Aug. 6, 2020
Around 50,000 tourists visited Sharm El-Sheikh, Hurghada since 1 July: Tourism minister Fri, Aug. 7, 2020
Egypt’s foreign reserves rise to $38.3B by end of July Thu, Aug. 6, 2020