AUC President: Egypt is great place. It is worthy to invest in its people 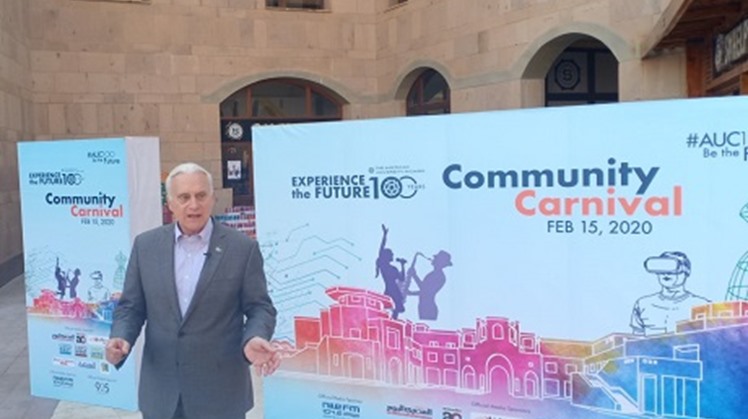 Mon, Feb. 17, 2020
CAIRO - 17 February 2020: The American University in Cairo (AUC) is celebrating the beginning of its second century by ‎organising a vibrant programme of events at its New Cairo campus from 15 to 19 February.‎

The president of the university, Francis Joseph Ricciardone told Ahram ‎Online: “AUC’s message from the centennial celebrations is that we are deeply rooted in this ‎country. We are committed to this country for the next 100 years.” ‎

Ricciardone added: “Egypt is great place. It is worthy to invest in its people. We hope other investors will ‎follow in our footsteps in education in particular.”‎

Riccardone appointed the 12th AUC president 1 July 2016. The AUC Board of Trustees ‎unanimously voted to renew its tenure for a second four-year term starting July 2020, according to Ahram Online.

‎“We have the freedom to do what we think is right and get support from people who share that ‎vision. AUC has many donors, from individuals and some foundations, and pursues diverse cooperations,” Riccardone ‎continued. He added that AUC stays out of politics and supports the programmes of the ‎Egyptian government in improving the quality of higher education.‎

Through this year, AUC is focusing on the future and its plans for the next 100 ‎years, under the slogan "Be the Future."

Riccardone stated that AUC's mission is to bring together great minds, and break down the barriers of ‎culture, religion, history and politics that separate people and cause distrust of one another. ‎‎

“People together from different disciplines and experiences can solve great problems of the ‎world,” he said‎.

AUC moved 12 years ago from Tahrir Square to its new campus in New Cairo. “We have enough space (in New Cairo) to build for the future. ‎AUC completed phase one, focusing on the architecture of the campus. Now, we are going to tackle ‎phase two.”‎

Ricciardone concluded: ‎“We cannot predict what the future will bring. We must invest in our people and in ‎education. The future is full of opportunities beyond our dreams and full of threats and ‎challenges that lie under our deepest fears.”‎

AUC’s CIMUN receives a record-breaking 10 awards, highest number of awards in its history Mon, May. 20, 2019