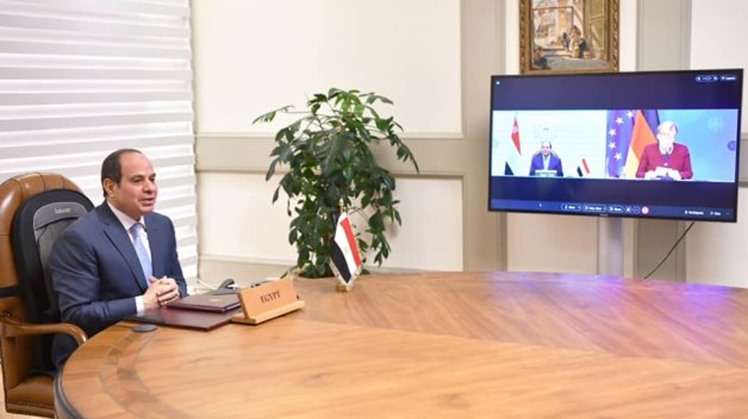 Mon, Oct. 18, 2021
CAIRO – 18 October 2021: Chancellor Angela Merkel praised Egypt’s efforts to retain process and find a fair solution to the Palestinian cause, as she spoke via video with President Abdel Fattah El-Sisi on Monday.

During the phone call, Sisi reviewed with Merkel Egypt’s efforts to consolidate ceasefire in Gaza in addition to the efforts of reconstruction in the strip, a statement by the Egyptian Presidency read.

He also reviewed Egypt’s movements and communication efforts on the bilateral and international levels to revive peace process and find a fair solution to the Palestinian cause through the resumption of peace talks based on international references.

Merkel hailed Egypt’s efforts and affirmed Germany’s keenness to boost consultation with Egypt in this regard.

During the phone call, Sisi and Merkel discussed a number of regional issues of mutual concern, especially the Libyan crisis, the statement said.

They affirmed the need to continue intensified consultation in this file during the current period, given Egypt’s pivotal role in working to settle the crisis permanently.

This is in addition to Germany’s role under Merkel to coordinate international efforts in this regard.

Sisi and Merkel agreed on the need to process with the political process in Libya until national elections are held next December.

They also highlighted the need for dismissing all foreign troops and foreign terrorists from the Libyan territories.

The president underscored Egypt’s stance on the need to reach a legal and binding agreement on the filling and operation of the dam.

This comes especially in light of the presidential statement issued by the United Nations Security Council.

The two sides hailed the development of economic relations between Egypt and Germany during the past years, embodied in Egypt’s firm cooperation and partnership with giant German companies.

They affirmed the need to expand economic cooperation between the two countries so that it includes other economic and industrial sectors.

Sisi affirmed Egypt’s appreciation for the great contribution Merkel has made since taking over the leadership of the German government in strengthening the bilateral relations between the two countries.

He expressing to her his sincere wishes of success after the end of her term in the German Chancellery.