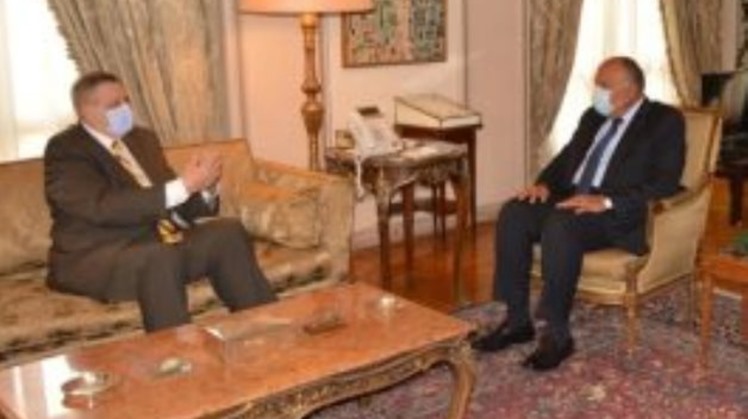 Sun, Mar. 7, 2021
CAIRO - 7 March 2020: Egypt's Foreign Minister, Sameh Shoukry, urged all Libyan parties to abide by the permanent ceasefire agreement, especially on the withdrawal of all foreign forces and mercenaries from the North African country.


Shoukry's remarks came on Sunday during his meeting with UN Special Envoy for Libya Ján Kubiš, where they discussed the most recent developments of the Libyan crisis, according to the spokesman for the Foreign Ministry Ahmed Hafez.


Shoukry also affirmed the importance of countering any attempts that may obstruct the unification of Libyan security institutions or widening division inside the Libyan community.


The top Egyptian diplomat briefed the UN envoy on Egypt's efforts to reach a political settlement to the Libyan crisis, emphasizing the need to go ahead with the current political path, the spokesman added.

Libya has been in chaos ever since the 2011 overthrow and killing of dictator Moamer Gaddafi in a NATO-backed uprising, with warring rival administrations battling for power. Since the downfall of Gaddafi, Libya has become a key route for irregular migration from Africa into Europe, across the Mediterranean Sea.

Several countries seek to solve the Libyan crisis, most prominently Egypt, which hosted the third meetings of the Libyan Constitutional Track from February 9 -11 in Hurghada, in the presence of delegations of the House of Representatives and the Supreme Council of State under the auspices of the United Nations.

In January 2021, the Libyan Constitutional Committee meetings were also held in Hurghada for a period of three days, in the presence of members of the House of Representatives and the State Council sponsored by the United Nations Support Mission in Libya.

At the end of 2020, a Libyan meeting was held in Cairo between representatives of the Libyan House of Representatives and the Supreme State Council in Libya, as part of the efforts, led by Egypt and sponsored by the countries of the region to support the path of a political solution in Libya.

Egypt earlier announced an initiative, dubbed the Cairo Declaration, which posits a Libyan-Libyan resolution as a basis for resolving the country’s conflict, drawing on earlier international efforts, including the Berlin conference.

In July, the Egyptian House of Representatives has authorized President Abdel Fattah El-Sisi to “take necessary measures” to protect national security, giving the president the green light to send troops to Libya.

Sisi said at a meeting with Libyan tribal chiefs in Egypt that any Egyptian military intervention in Libya may only materialize upon a request by the Libyan people and permission from the Egyptian House.

According to Article 152 of the Egyptian constitution, the state has to seek the Parliament’s approval before declaring war or sending its forces in combat missions. The members attending the session are not authorized to disclose any details of the discussion inside this secret meeting.

During his meeting with the tribal chiefs on July 16, Sisi saidEgypt has always stood by a peaceful solution in Libya through encouraging negotiations between Libyan factions. However, it will not stand idly as it watches activities that threaten Egypt’s national security.

“Egypt has the strongest Army in the region and Africa,” he said, adding that it is, however, wise and does not assail or invade other territories.

He noted that in case the Egyptian forces enter Libya, they will be led by tribal leaders carrying the Libyan flag.

Sisi promised that Egypt will- if necessary- intervene "only at the Libyans' request and withdraw upon their order.”