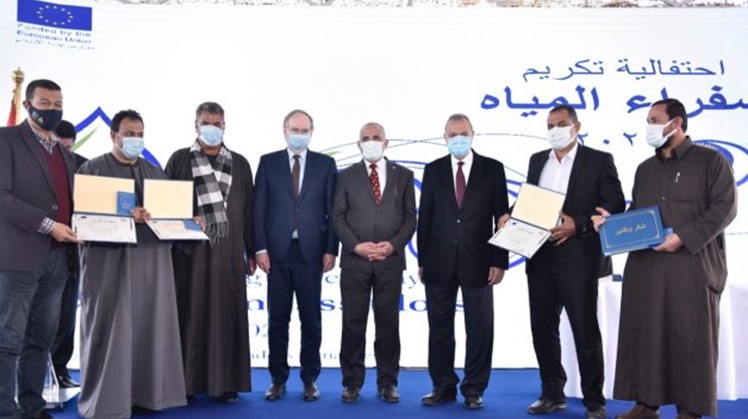 Mon, Mar. 1, 2021
CAIRO - 1 March 2021: The Ambassador of the European Union (EU) to Egypt Mr. Christian Berger, the Minister of Water Resources and Irrigation Dr. Mohamed Abdel-Ati and the Governor of Qalyubia Mr. Abdel Hamid El-Haggan participated today in a ceremony in honour of students and farmers who won in the previous three annual national water awareness competitions, giving them the title of ‘Water Ambassadors’. The event was held in Afla Garden in El Kanater El Khairia, Qalyubia Governorate.

Ambassador Christian Berger commended Egypt’s efforts in addressing the challenge of water scarcity, with rapid action to rationalize water consumption, develop modern irrigation systems and reduce waste. He pointed out that the EU is a long-term supporter of Egypt in this area. The EU contributed EUR 550 million to water projects in the last ten years. He added that these grants leveraged funds from European financial institutions of about EUR three billion in this sector, with thousands of permanent or short-term jobs created, and benefiting more than 18 million people.

Ambassador Berger emphasized that the EU is committed to supporting sustainable water management in Egypt through development projects as well as the expansion of policy dialogue with decision makers. “The water sector is a key sector in Egypt-EU cooperation, which will result in better management of water resources and improved lives for millions of Egyptians.” He also reaffirmed the EU’s support to Egypt’s plans for sustainable development and the country’s National Development Strategy ‘Vision 2030’, and particularly in relation to achieving the priorities of the National Water Resources Plan 2037.

Minister Mohamed Abdel Ati and Ambassador Christian Berger expressed their confidence that the ‘Water Ambassadors’ will spare no effort in spreading the message about the urgent need to save water among their counterparts and in their local communities.

During the event, two farmers who won the National Water Conservation Competition gave presentations on the advantages of switching from traditional to modern irrigation systems. They also presented their efforts in transferring knowledge and sharing their experiences with other farmers in their communities.

The ‘Water Ambassadors’ will benefit from exclusive access to all water-related activities implemented by the Ministry in cooperation with the EU. They will also be invited to exclusive round table discussions with officials from the Ministry of Water Resources and Irrigation as a way highlight their progress and achievements.

The design of Afla Garden, at which the event took place, was implemented through the EU Water STARS programme. The programme supports the development of technical studies with a view to improve operational efficiencies, increase efficient use of water resources, reduce water losses and protect public health and the environment.