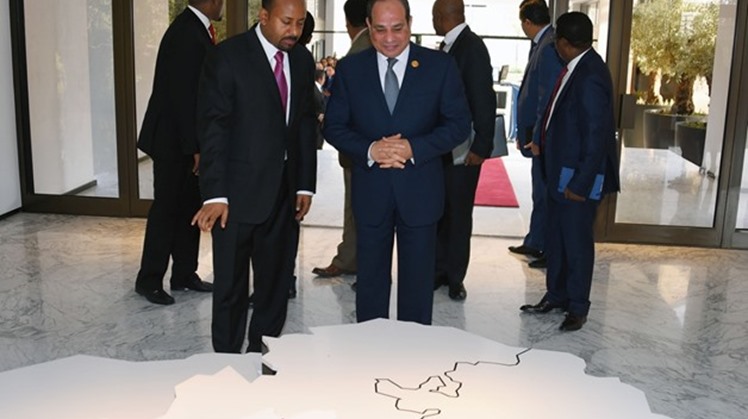 Sun, Feb. 2, 2020
CAIRO - 2 January 2020: Egypt, Sudan and Ethiopia reached an agreement on only three points of contention regarding the construction of controversial Grand Ethiopian Renaissance Dam (GERD), following four-day negotiations between the three countries’ Ministers of Foreign Affairs and Water Resource in Washington D.C., according to a joint communique on Friday.

The three countries agreed on the following:

The US drafted a document of agreement regarding the three above-mentioned points and was unilaterally signed by Egypt, the statement said.

In addition to this, the three countries agreed on the importance of completing negotiations and reaching an agreement regarding the mechanism of the dam operation during the normal hydrological conditions, said the statement, adding that they will resume the talks on the mechanism of monitoring and following up the implementation of the agreement, the exchange of data and information, and on the mechanism of dispute settlement.

They also agreed to address the issues related to the dam safety and to complete the studies on the environmental and social impacts of the dam construction, the statement said.

The scientific and legal committees of every country have been tasked to resume the negotiations for reaching a final agreement, the statement stated, adding that the Ministers of Foreign Affairs and Water Resources will meet again on February 12-13 in Washington D.C. to approve the final draft of the agreement before the signature due late February 2020.

Egypt voiced its appreciation to the efforts exerted by the US Administration and US President Donal Trump to reach a comprehensive, fair and balanced agreement that cares for the interests of the three Nile countries.

Over the period between January 28 and 31, the ministers held a series of meetings, to reach a final agreement on the disputed points after they achieved a breakthrough in US,WB-brokered meetings on January 13-15 to end a nine years of dispute over the $5-billion dam.

The disagreement between the three states dates back to May 2011 when Ethiopia started building the dam; Cairo has voiced its concerns that building the dam could harm its 55.5 billion cubic meters share as 80 percent of Egypt’s share comes from the Blue Nile and Ethiopian Heights, while Ethiopia says it is necessary for its development and electricity production. However, the three countries reached an initial deal in 2015, announcing the “Declaration of Principle,” per which the dam should cause any harm to the Nile downstream countries.