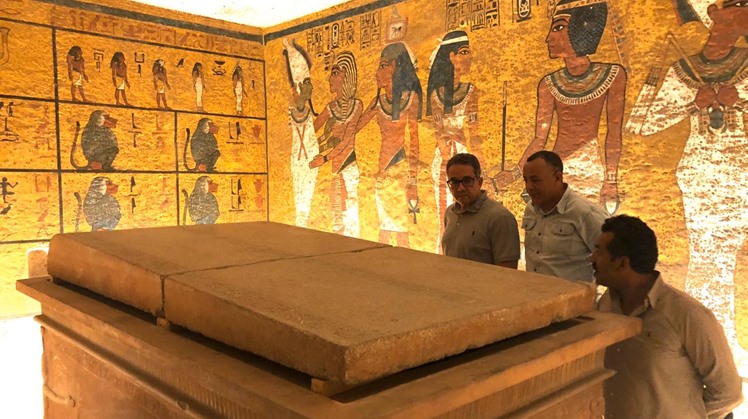 Wed, Oct. 16, 2019
The Minister of Antiquities went to visit the tomb of King Tutankhamun in the Valley of the Kings on the west mainland in Luxor, to inspect the installation of the quartzite sarcophagus of the king in the tomb.

Pictures of the coffin at the time of its discovery during the last century show that it was divided into two parts above the coffin, before being placed on the ground in the cemetery next to the coffin decades ago.

Earlier this week, the Minister of Antiquities, Dr. Mustafa Waziri, Secretary-General of the Supreme Council of Antiquities and Dr. Zahi Hawass, inspected the tomb of the young king and discussed the possibility of installing the lid on the coffin where it was directed to install the lid in its original place above the coffin for visitors to see for the first time.

The visit came after the Minister of Antiquities, this morning, inspected the work of the archaeological mission of the Ministry of Antiquities of the Assasif cemetery in the Western mainland in Luxor, which succeeded on Monday, October 14 to unveil a huge cache of colorful human sarcophagi whose details will be announced next Saturday morning at a press conference in west Luxor.

This discovery is one of the largest and most important discoveries that have been announced during the past few years as it includes so far more than 20 colored wooden human coffins, in a state of conservation, colors and inscriptions in full and still closed, and were revealed in the situation that left them The ancient Egyptian where they were found gathered in a cache in two levels on top of the other.