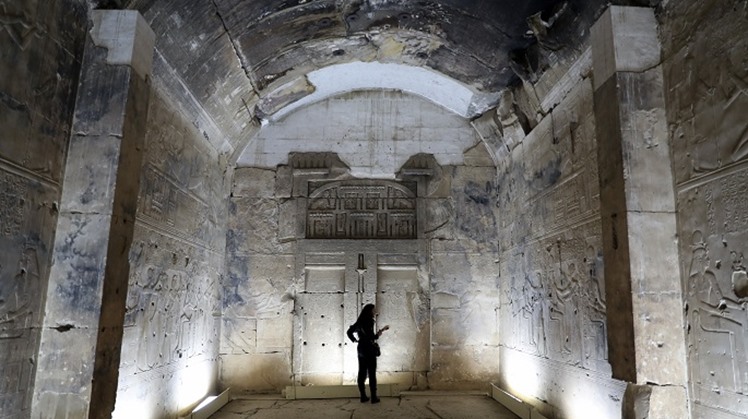 Thu, Sep. 5, 2019
Egyptian Ministry of Antiquities decided to display the coffin of ancient Queen Tausert, the last ruler of Egypt's 19th Dynasty, to the public for the first time since its discovery two decades ago.

In a statement, Secretary General of Egypt's Supreme Council of Antiquities (SCA) Mostafa Waziri said that the coffin will put on display within the few coming days at the Luxor Museum in Upper Egypt.

He explained that the coffin has already been transferred from the place of its discovery, at the closed tomb of King Bay in Luxor's west bank, to the Luxor Museum.

Waziri added that the transfer took place under the supervision of a team of archaeologists from the ministry, who made a report about the status of the coffin to prove the state of preservation before the transfer process.

Another team of restorers made initial restoration work before packaging and transferring the coffin to the museum, the official pointed out.

The six-ton coffin is made of pink granite and is decorated with a collection of drawings depicting the four sons of Horus, who are a group of four gods in ancient Egyptian religion, as well as inscriptions of prayers for the deceased.

The 19th Dynasty of Egypt is classified as the second Dynasty of the Ancient Egyptian New Kingdom period, lasting from 1292 B.C. to 1189 B.C.

The 19th Dynasty and the 20th Dynasty furthermore together constitute an era known as the Ramesside period. This Dynasty was founded by Vizier Ramesses I, whom Pharaoh Horemheb chose as his successor to the throne.

Also on Friday, the Antiquities Ministry announced that eight blocks of one of Ramses II's obelisks that were found in his temple at San Al-Haggar archaeological site in Zagazig, arrived in Cairo, where they will be restored, assembled and erected in the capital's renowned Tahrir Square.

According to official Ahram Online news website, Mostafa Waziri, the transportation of the parts of the obelisk was carried out under tight security by the tourism and antiquities police, within the framework of the government's plan to beautify and develop Tahrir Square as part of the Historic Cairo Development project.

The obelisk is carved in red granite and decorated with scenes depicting Ramses II standing before the gods with his different titles written alongside. After restoration and assembly, the obelisk will be 17 meters tall and weighs 90 tons, according to Ahram Online.

A collection of two obelisks, two colossi and two columns from the temple of Ramses II were restored, assembled and re-erected in their original location, he said.

He added that the ministry has started the second phase of the project, which aims to restore, assemble and re-erect more obelisks, colossi and columns.

Ramses II, also known as Ramses the Great, was the third pharaoh of the 19th Dynasty. He ruled ancient Egypt about 3,300 years ago, leaving behind a rare legacy of monuments including his well-known great temple in the Nubian village of Abu Simbel village in Aswan province in southern Egypt.