How didi Champollion deciphered the hieroglyphic symbols? Celebrating 200 years of solving the puzzle 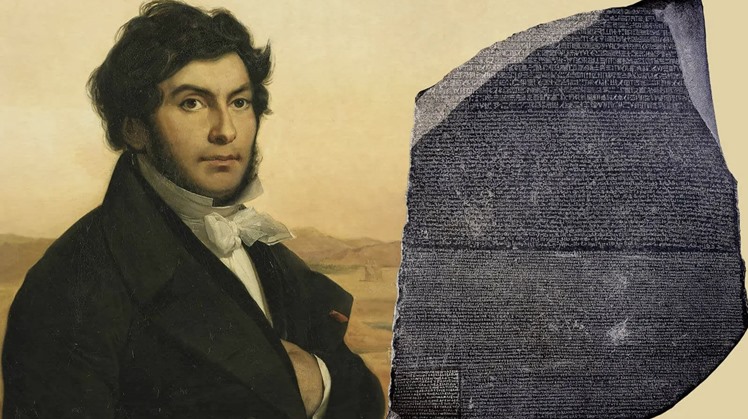 Wed, Sep. 14, 2022
The ingenious tactics employed by Jean-François Champollion deciphered the stone in September 1822, giving access to a body of ancient Egyptian writing.

14 years before the historical discovery a paper presented before the Académie de Grenoble in eastern France in 1806 was noteworthy for two reasons: first, the author, Champollion, was only 16 years old, and secondly, the astonishingly knowledgeable teenager presented a very bold idea as he believed that language Ancient Egyptian lived in the form of the Afro-Coptic language, and although his assertion would not be entirely correct (Coptic is not identical to ancient Egyptian, but derived from it), the insights of the young scholar would later contribute to solving one of the greatest scientific mysteries of the nineteenth century.

Jean-François Champollion was born in Vigia, southern France in 1790, and the French Revolution and the rise of Napoleon Bonaparte formed the background of his childhood. Champollion of ancient languages ​​became familiar with Greek, Latin, Amharic (a Semitic language from Ethiopia), Chinese and Coptic.
Rosetta Stone
Rosetta Stone

Champollion's fascination with Coptic was triggered by something that dates back to his childhood. In 1799, a year after Napoleon's conquest of Egypt, French soldiers who were repairing a fort near Rashid (known to Italians and French as the Rosette) noticed that some of the stones in the structure were engraved with hieroglyphs and a sharp-eyed officer noticed according to National Geographic that one of the fragments contains hieroglyphs as well as a second text block in Greek, and then a third unknown text (now known as the Demotic script).
Translations of the Greek inscription of the Rosetta Stone identified it as an edict of Ptolemy V Epiphanes, who died in 180 BC and used the Greek Ptolemaic kings, while hieroglyphs were intended for temples and priests, the race was now open to scholars from various countries to use the Greek script to begin the process of identifying elements in hieroglyphic texts The interview, because its translation will open the door to knowledge and science of Egyptian civilization.
In 1807, Silvestre de Sassi was appointed to a new pupil: 17-year-old Champollion, who had moved from Grenoble to Paris and the French capital was full of Egyptian artifacts from Napoleon's campaigns, and publication of a description of Egypt was underway with many drawings of antiquities and inscribed objects.

Champollion was able to satisfy his obsession with Coptic by reading several texts, which were brought to Paris from the Vatican Library in Rome. In 1815 he produced a Coptic dictionary that he was able to present to Napoleon before his defeat at Waterloo. Although the Coptic language was written mostly in letters derived from Greek, it retained some of the syntax and vocabulary of the ancient language, and Champollion was convinced that his complete knowledge of the Coptic language would be the key to cracking the hieroglyphs.

Champollion studied well in Young's research, the Rosetta inscriptions and those on the stele of Philae, this stele - which was carried from Egypt to Kingston Lacy in England also had bilingual inscriptions in Greek and hieroglyphs.
Champollion's discovery is celebrated as one of history's great "illumination" moments: it happened on September 14, 1822, when he deciphered the entire name of Ramses in a hieroglyphic text from the Abu Simbel temple complex built by Ramses II, Champollion realized that the name had been formed by a combination Of "Symbolic, symbolic, and phonetic all at once," he exclaimed, full of delight: "I get it!" Days later, he wrote a book in Paris with a list of 25 phonetic signs emphasizing in demotic and hieroglyphs.

The discovery in 1822, exactly 200 years ago, was a brilliant start to Champollion's enormous contribution to the studies of ancient Egyptian writing. Although Champollion owes much to the Rosetta Stone, his work with other texts, his unparalleled knowledge of Coptic and other Semitic languages, and his dedication Throughout his life in studies, it gave him an advantage over his English competitors.