An unprecedented discovery of the remains of an Egyptian mummy.. learn the story 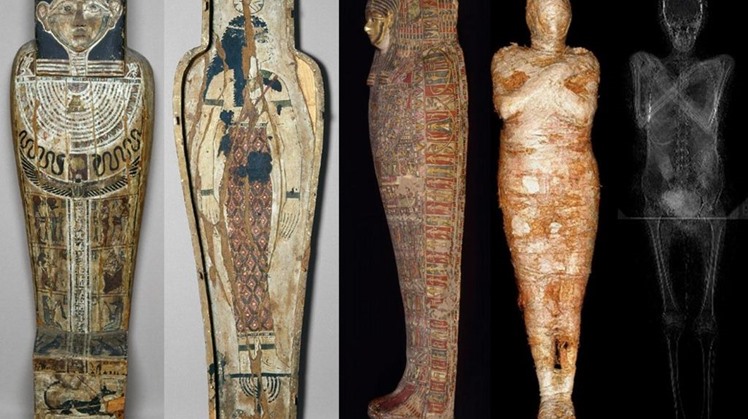 Wed, Jul. 27, 2022
A team of researchers from the University of New Jersey in the United States, the University of Alcala in Spain and the American University in Cairo have found strong and convincing evidence that a mummy discovered in Luxor suffered at some point in her life from a brain injury that was the victim of a stroke.

The study authors wrote in an article recently published in the journal World Neurosurgery: that the mummy belonged to a woman who lived in ancient Egypt who suffered a stroke that paralyzed her left half of her brain, and who lived with this condition for several years, this type of brain injury is very familiar to doctors In the modern era.

This is a fascinating conclusion, as no clear evidence of stroke-related damage has been found in any other ancient skeleton in the world. A 2017 study of the skeleton remains of an 18th-century Italian priest named Don Giovanni Arcangeli, who suffered a stroke before his death, showed that It was by far the oldest skeleton identified as belonging to a stroke victim.

The person who suffered this unpleasant fate is a woman between the ages of 25 and 40, who has lived in Egypt for about 2,700 years.

The Spanish archaeological mission found the mummified remains of the woman in Durat Abu El-Naga, the site of the ancient cemetery, which has been conducting excavations on the west bank of the Nile near Luxor for the past two decades.

For the purposes of this research project, scientists studied the mummified remains with X-rays to get more information about bone structure and other skeletal characteristics, but it was the direct physical examination of the mummy that led to their startling discovery, and it was its skeletal abnormalities that told the tale.

The woman's shoulders were contracted and her head was pointing down as if she were being forced in that direction, her right arm was outstretched to the side of the body, but her left arm was bent at the elbow with the forearm on the chest with the left hand in a very flexed position, the legs were straight and together, but it was A slight development of the left foot is evident.

Did King Tut have a stroke?

While the mummification process continued, the embalmers attempted to correct the distorted position of the woman's head and chest. They did this by placing a pair of sticks behind her back, which turned her posture into a more upright position than would have been apparent when she was living, and another wooden stick in the form of a crutch was placed next to her body, probably because she needed a cane to walk after her exposure For injuries caused by a stroke.

The discovery of sticks in the woman's grave may be of particular interest. This discovery may force archaeologists and Egyptologists to re-evaluate similar artifacts discovered in other regional excavations over the years.

Reveal the brilliance of Egyptian medicine

Historical accounts describe Egypt during the Twenty-fifth Dynasty in decline. Political and economic instability helped enable the Nubian invaders to conquer and control the country, beginning in 744 B.C., but the changing tides in Egypt's political fortunes had no apparent effect on the state or The progress of Egyptian medicine, which remained among the most advanced Egyptian medicine in the ancient world for thousands of years.

Given the impressive advances in medical science, it wouldn't be surprising if Egyptian doctors were aware of strokes, understood their causes and effects, and took measures to help sufferers deal with the long-term impact.