Deir el-Bahari, which includes the mortuary temple of Queen Hatshepsut.. Learn its story 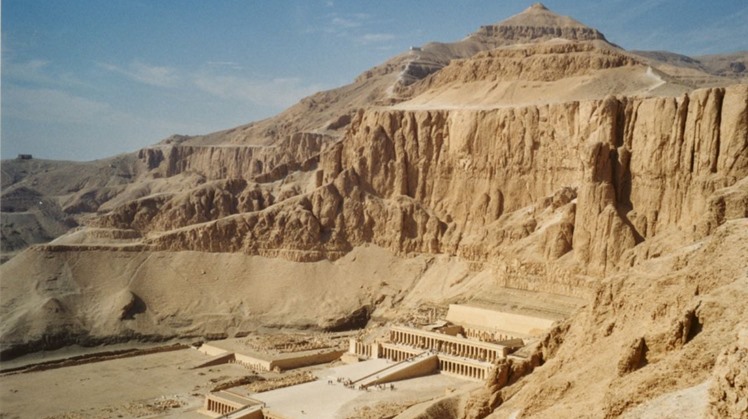 Sat, Jan. 15, 2022
The site of Deir el-Bahari is famous for containing the funerary temple of Queen Hatshepsut (1473-1458 BC) on the western bank of Luxor. In addition to her father, King Tuthmosis the First, where she was presented in sacrifices in order to guarantee the queen's soul an eternal and safe life in the next world.

The site of Deir el-Bahari carried a measure of holiness because it is linked to the goddess Hathor, who patronizes the kings of Egypt, led by God Horus, the first and mythical ruler of Egypt. The most famous kings of ancient Egypt in the modern state in the Valley of the Kings, we see paintings bearing prayers for Hathor in the form of a cow emerging from these mountains, whose top appears in the form of a pyramid.

The site of the funerary temple on the western mainland was linked to the idea of ​​sunset, where the journey of the god of the lower sun in the other world, according to the Ministry of Tourism and Antiquities, and this temple was on the other side with the temple of Amun in Karnak on the eastern mainland, where the statues of the Lord Amun and his wife Mutt and their son Khonsu It goes in an annual festive procession known as the Beautiful Valley Festival to cross the Nile and visit the royal funerary temples, including the Temple of Hatshepsut, which was one of the important stations for this procession.

Hatshepsut was preceded by another king in establishing his funerary temple in that important area by about 600 years, which is King Mentuhotep Nebhepetre "2055-2004 BC. M" of the Middle Kingdom, where his temple was built in a gradual form, Queen Hatshepsut borrowed the design of her temple from him.