The most prominent effects of the French campaign on Egypt: Discovery of the Rosetta Stone, and Description of Egypt books 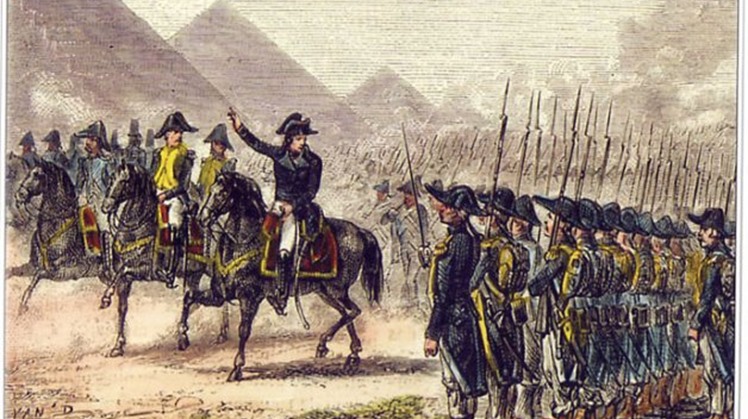 Tue, Oct. 19, 2021
Today marks the 220th anniversary of the exit of the French campaign in Egypt, on October 18, 1801, a military campaign launched by General Napoleon Bonaparte against the Ottoman states of Egypt and the Levant (1798-1801 AD).

Although the campaign was military, it also had scientific goals. The beginning of the campaign was the Mediterranean campaign (1798), a series of naval battles that included control of Malta, from a scientific point of view, the campaign led to the discovery of the Rosetta Stone, thus laying the foundation stone for Egyptology.. Among the effects left by the French campaign:


When the French campaign came in 1798 AD, led by Napoleon Bonaparte, and continued to advance through the city of Rosetta, officers Pierre François Bouchard found the stone made of basalt in 1799 AD, and this discovery was announced in the newspaper that was issued by the campaign to its fighters, and it was called the Rosetta Stone because it was discovered in the city of Rashid At the mouth of the Nile branch in the Mediterranean.
The stone was seized by British colonialism illegally by force and without right and placed as a gift in the British Museum, since British forces defeated the French in Egypt in 1801, and the original stone became in possession of the British after the surrender of the French campaign and was transferred to London, and publicly displayed in the Museum The British Museum has been in the works almost continuously since 1802, and has been the most visited antiquity in the British Museum.

The encyclopedia consists of 37 volumes entitled "Description of Egypt", or "Total notes and research that took place in Egypt during the French campaign", notes written and compiled during the French campaign against Egypt, where Napoleon Bonaparte took with him a team of scholars from all disciplines to record their observations.
The book is considered the most important publication on the Egyptian cultural, scientific, linguistic and historical heritage during the period of the French campaign against Egypt (1798-1801). After the team returned to France, the French Minister of the Interior at the time, Jean-Antoine Chaptal, formed a committee that included 8 scholars who collected and published all the scientific materials related to the campaign. The volumes include studies on various aspects of life in Egypt, as witnessed by the scholars and engineers of the French campaign on Egypt, which translated and defined many of the Egyptians' customs and traditions.

The first printing press with Arabic letters entered the gap at the hands of Napoleon Bonaparte during the French campaign against Egypt. The aim was to print data and publications for distribution to the people to gain the Egyptians’ sympathy for the campaign, as stated in the last issue of the Memory of Contemporary Egypt magazine issued by the Library of Alexandria.
The Eastern Press printed the first appeal addressed to the Egyptian people on June 22, 1798, while it was in the Mediterranean, followed by the “Arab Statement” prior to the occupation of the city on July 2 of the same year. “13 Mesidore” written in Arabic, a copy of which bears the phrase “in Alexandria from the Eastern and French Press.” Napoleon then left for Cairo with the French division of the press, leaving the Arab Division in Alexandria until the end of 1798.