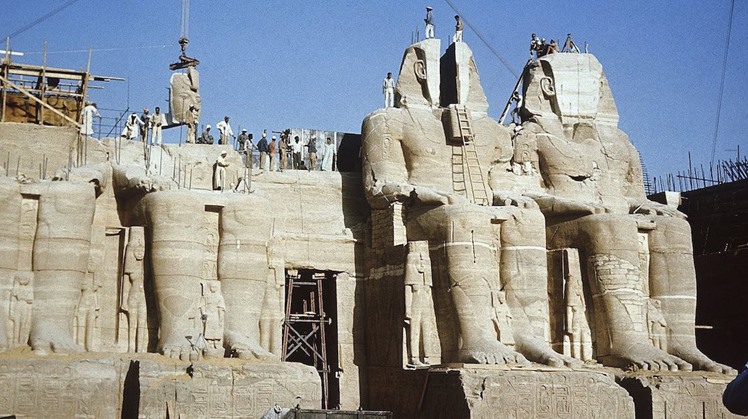 Wed, Sep. 22, 2021
On this day, September 22, 1968, the transfer of Abu Simbel temple was completed, where the temple was carved in the mountains and dates back to the reign of King Ramses II in the 13th century BC, and it is a permanent monument to him and Queen Nefertari, to celebrate the anniversary of his victory in the battle Kadesh, with the start of the implementation of the High Dam project, the temple became threatened with flooding and urgent intervention was required to save it. It is cutting the whole site into large blocks (up to 30 tons and averaging 20 tons), and reinstalling them in a new site, in what is considered one of the greatest works of archaeological engineering.

The idea was implemented by the artist Ahmed Othman, founder of the Faculty of Fine Arts, Alexandria University, who had an influential role in preserving the Egyptian heritage, and this was proven through a set of documents for the project to move the temple, which was published by art expert Hossam Rashwan in 2020, which proves the role of the late artist. Ahmed Othman in the transfer of the Temple of Abu Simbel.

Hossam Rashwan explained that in 1954, Ahmed Othman organized the transfer and restoration of the colossal statue of Ramses II from Mit Rahina to Bab al-Hadid Square in front of the Cairo railway station. And re-assemble the temple again, and indeed, the project was submitted on January 18, 1959, to Dr. Tharwat Okasha, Minister of Culture at the time, 8 years before the project was transferred.

The example, Ahmed Othman, narrated the story in detail under the title “My Story with the Rescue Operation” during one of his lectures, and mentioned the details of the project he presented and stated, “One of the most important archaeological temples that will be flooded with water to more than 60 meters from the current water level to reach 182 meters after implementing The High Dam is a huge temple carved for Ramses II and the Temple of Abu Simbel. This immortal trace in human history is one of the major events and a flag of the fluttering flags that Egypt is proud of and cherishes forever. She had, and still is, a great merit in the advancement and elevation of man.

Ahmed OthmanThe example, Ahmed Othman, says, according to documents dating back to September 8, 1968 AD, that in Alexandria, specifically in 1959, the idea of ​​saving the Abu Simbel temple arose. The population, and to restore prosperity and well-being to the people of Egypt, and this led to the threat of the antiquities that abound in the Nuba region by drowning and annihilation, especially since one of the most important archaeological temples that will be flooded with water to more than sixty meters from the current water level to reach 180 m after the implementation of the High Dam is a huge temple carved in the rock Ramses II, which is the temple of Abu Simbel, has this immortal impact in human history, which is considered one of the major events in the development of our civilization.

Ahmed Othman stressed that the whole world had to search for a way to save these monuments from the danger of drowning, and it was also necessary for Egypt to start implementing the construction of the High Dam, as it is the hope of the future and a symbol of a better life for the people of Egypt, and the peoples moved quickly to claim that these monuments belong to them all. The King of Humanity” and that its annihilation is the elimination of an ancient ancient civilization that is considered the origin of the civilizations of successive peoples, and the global appeal of UNESCO called on governments and institutions to contribute quickly to saving and protecting these monuments.

The example, Ahmed Othman, explained that opinions differed on how to save these cultural monuments, and engineers, scientists and artists competed to show peaceful ways to protect and preserve them from drowning in a way that ensures their safety and fulfill their role as a cultural monument cherished by humanity. Access to the implementation of a project that ensures the safety of saving it at the lowest possible costs.


Hossam Rashwan added that there were ideas that were put forward in this regard, as one participated in the construction of a giant “aquarium” around the temples with underwater viewing rooms for visitors, but this was rejected on the pretext that the monuments would suffer.

The second idea that attracted attention involved the gradual lifting of the temples by hydraulic jacking to be above the waterline, but it was also rejected due to its cost and danger in the event of failure.


According to the documents, Ahmed Othman indicated that UNESCO has researched and studied these projects and found that it is difficult to reach a project that can be implemented from the scientific, technical and material aspects, and things went quickly, and the peoples shouted “Save the monuments of Nubia” so that science and human thought intervene in achieving the rescue of these monuments. .

Here, the Arab people in Egypt prove the authenticity of their civilizational origin and their superior ability in thought and research, and came in 1959 AD, specifically on January 18, to announce to the whole world the idea of ​​the Arab project that I submitted to save these monuments from the heart of a scientific site at the Faculty of Fine Arts.


The transportation process was very complicated, the most care had to be taken during the dismantling stage, the roofs and walls and not least the temple facades had to be cut into blocks, hand saws and iron wire were used because if the pieces were more than 8 mm wide they would be visible when the blocks were reassembled, electric saws It would have caused a lot of waste when cutting the sandstone, and all this was the thinking of Ahmed Othman, who was preparing his report with meticulousness and consideration of all the issues related to solving the complex question of how to save the temples.

The example was explained by Ahmed Othman, a review of the great impact was actually done, and my realistic study of the project ended with the correctness of the method of publishing and cutting into parts, then transportation and installation in an appropriate place, and after my complete conviction, the technician