Mosques with a history .. The Al-Nasir Muhammad Mosque was used as a prison and storehouse during the British occupation 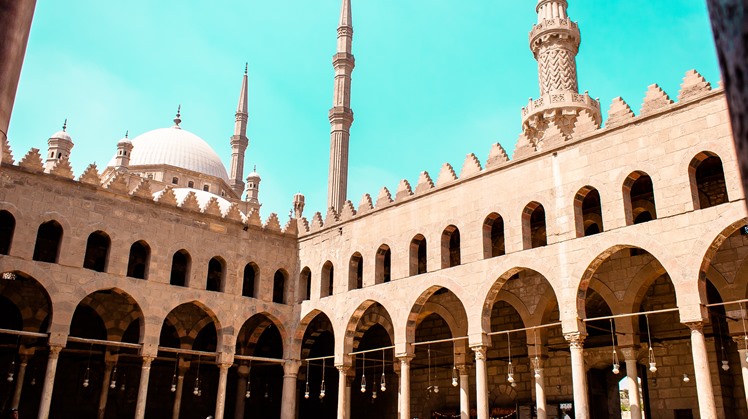 Wed, May. 5, 2021
Sultan Al-Nasir Muhammad Mosque, located in the middle of the Citadel of Salah al-Din, and it was the official mosque in the castle during the Mamluk era, located in the southern part of the castle. Sultan Al-Nasir Muhammad bin Qalawun ordered to build it "718 AH / 1318 AD", whose reign lasted forty-two years, which was interrupted by three Many times, as it is considered one of the most Mamluk sultans who built monuments during his rule, then demolished and rebuilt it (735 AH / 1335 AD), it was taken care of by the later Mamluk sultans, and it was used by the Mameluk dwellers of the castle.

The mosque, which is 63 meters long from north to south and width from east to west 57 meters, is one of the most prominent architectural features of the castle, as it has a unique architectural style that blends different architectural designs. The dome is decorated on the inside with inscriptions bearing Qur’an verses, the name and titles of al-Nasir Muhammad and the date of the mosque’s renewal "735 AH / 1335 AD". The mosque is also distinguished by its ceilings decorated with beautiful geometric shapes, wooden inlaid with ivory and mother-of-pearl with the name of King Farouk 1949 AD.

Al-Maqrizi says that the mosque was known as the Nasserite Mosque or the Sermon Mosque in the Citadel of the Mountain, which replaced an old mosque in the castle dating back to the reign of al-Malik al-Kamil.

And the book "The Mosques of Egypt and Its Righteous Saints" mentions in which the honorable ceremonies emerged in the demolition of the mosque that the Sultan, the Most Exalted, had established in the guarded castle, and to renew its building, demolishing all that was inside it from the galleries, the palace and the mihrab, and renewed its construction with what the eyes did not see better than it, and he brought great columns that were Forgotten in the city of Ashmunin in Upper Egypt is one of the works of the Egyptian lands, and these columns were in the barba which is in the city of Ashmounin from the era of the priests and were transferred by the Sultan through the assignment of Prince Seif al-Din Urs Bagha al-Nasiri to transport them, and the engineers, porters, and stone-cutters went in his service.

As for the dome of the mosque, Abu Bakr Al-Dawdari says, "When the Sultan rebuilt the dome, he made it a tall, tall, after he brought it the great granite columns from the Ashmenin, and renewed the shrine to the right of the mihrab, which he also renewed."

The book “Mosques of Egypt” indicates that the Al-Nasir Muhammad Mosque in the castle is one of the greatest, best and most delightful mosques, and the most decorated, spacious, high-rise building, furnished with superb marble, the roof is lined with gold, and in the middle of it is a dome, followed by a cabin in which the Sultan prays Friday.

The condition of the mosque worsened in the Ottoman era, as its dome was demolished, its pulpit was lost and misused, and the mosque was completely destroyed in the era of the British occupation in 1882AD. It was used as a prison and storehouses for the army during the British occupation, 1882AD, which led to its destruction and restoration in 1948.

But the largest renovation of the mosque was carried out by the Committee for the Preservation of Islamic Antiquities in 1947 AD, as it restored what was destroyed from the mihrab wall, and renewed the small mihrab and brushed the floor of the mosque with limestone instead of the marble that used to cover the entire mosque when it was established.