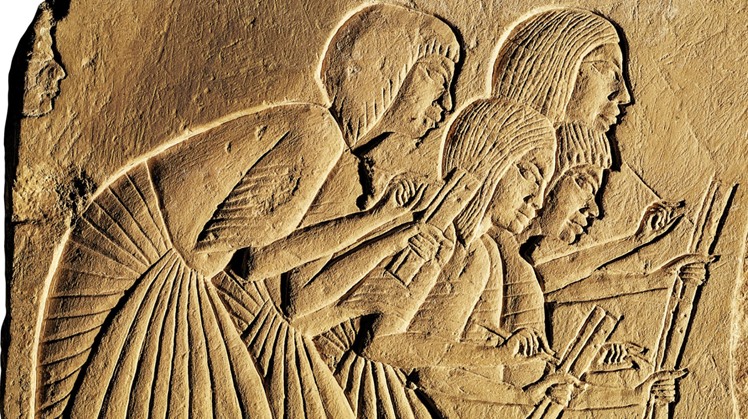 Wed, Jan. 13, 2021
These pharaohs' private letters expose how politics worked 3,300 years ago
The Amarna Letters preserve an inside look at Egyptian diplomacy, revealing how power brokers maneuvered, alliances were forged, and pharaohs were flattered.

SOMETIMES, ARCHAEOLOGISTS STUMBLE on not just one, or a few, but an entire cache of documents that utterly transforms their understanding of an ancient period, and whose fascinating details bring that distant time into sharp focus. The trove that transformed Egyptology is undoubtedly that of the Amarna Letters, 382 clay tablets considered the oldest documents of diplomacy ever found.

Beginning in the reign of Amenhotep III (1390-1353 B.C.), Egypt’s great builder king, the archive also tracks the reign of his son, Akhenaten (1353-1336 B.C.), whose religious revolution convulsed ancient Egypt for a generation. The letters open a window into 18th-dynasty Egypt and give a detailed snapshot of the eastern Mediterranean and Middle East in the Late Bronze Age, just as Egypt was consolidating its greatness and the new power of Assyria was beginning to flourish.

Revealing the writers’ flattery, arrogance, jealousy, and groveling, the letters also provide an insight into the developing complexity of international diplomacy. The growth of large empires jostling for supremacy had created the need for a system of rules, and the Amarna communiqués give historians unparalleled insights into how these early rules worked.

City of the sun
Around 1348 B.C., Pharaoh Akhenaten moved his court to an isolated spot farther north, roughly equidistant between Thebes (his former capital) and Memphis. The transfer was part of the pharaoh’s radical program to exalt Aten, the solar disk, as the almost exclusive divinity of Egypt.

Akhenaten’s new capital, on the east bank of the Nile, was called Akhetaten, meaning “horizon of Aten,” possibly because of nearby hills that frame the rising sun. The modern name of the place, Tell el Amarna, is used interchangeably with the site of Akhetaten, and it has given its name to the extraordinary culture that briefly flourished when the upheaval of the pharaoh’s Aten cult paralleled a radical change in art, known as Amarna style.

Akhenaten’s reign, however, was not just centered on religious and artistic upheaval. He had inherited a kingdom of huge power and regional prestige from his father, Amenhotep III, and continued pursuing Egyptian interests, particularly in mineral-rich Nubia to the south. Until his death in 1336 B.C., Egypt’s capital was a bustling city filled with palaces and temples, homes, barracks, and administrative buildings. The latter contained the ongoing archive of diplomatic letters, begun under Amenhotep III and Queen Tiye. (King Tut's grandparents were Egypt's royal power couple.)

The ancient city was identified at Amarna in the late 1700s, when Akhetaten’s boundary stone was found there. The letters came to light in the 1880s after a series of chance finds. As news of their existence spread, the site suddenly acquired huge archaeological importance. The curator of the British Museum, Wallis Budge, managed to obtain a batch of 82 pieces. A significant number of tablets also found their way via the antiquities market to the Egyptian Museum in Cairo and the Staatliche Museum in Berlin.

Led by British Egyptologist William Flinders Petrie in the 1890s, the first significant excavation at Amarna soon uncovered more tablets from the time of Akhenaten. During his first campaign, Petrie excavated a building with the name “Bureau of Correspondence of Pharaoh” stamped on its bricks.

A meticulous archaeologist, Petrie also had an instinct for publicity. He knew the Amarna Letters would help attract patrons to fund the dig. His examinations of the documentary riches of the letters and the archaeological remains of the ancient capital hugely boosted knowledge of this dynasty and the New Kingdom.

Not all the letters were found at once. When the Norwegian linguist Jørgen Alexander Knudtzon ordered them chronologically within geographic groupings in the early 1900s, there were 358. The remaining 24 were discovered in the course of the 20th century and incorporated into Knudtzon’s system of numbering, still used by scholars today. (Here's what the Armana Letters reveal about ancient pirates.)

The letters are not written in ancient Egyptian, but in Akkadian, a language spoken widely in ancient Mesopotamia. In the second millennium B.C., Akkadian became a lingua franca across the whole region, similar to the role English plays in international relations today. It is written in the wedge-shaped writing system, cuneiform. Most of the tablets found to date are letters received by the Egyptians. Only a few copies were retained of letters written by the pharaohs.