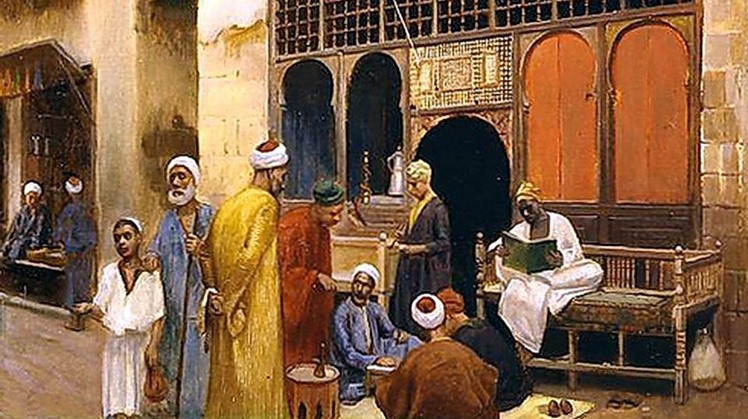 Wed, May. 27, 2020
Artists from the West were fond of the Egyptian street, catching the special moments, and most of them in the bustling street full of life, including a painting "outside the cafe" by Swiss artist Rudolf Johan Weiss, who lived between (1846-1933).

Through this painting, "Rudolph Johann Wise" sought to present an image that Egyptian privacy saw, and it really is, and can be seen so far in the streets of Cairo, where some people sit on the café to eliminate public and personal interests as well.

The scene may be global in the sense that all civilizations know this importance of the cafe, but each country presents it in its own way, and it appears that the figures depicted in this painting are trying to conclude a contract, a contract to buy or sell or solve a problem, as one of the sitting men listens attentively to one of the standing men He speaks, while the men sit on mats made of halfa.

Of course, not all of the people appearing in the painting participate in solving the problem or the sale and purchase contract, there are other personalities that appear in the artwork but do their own role, including that of the cafe man, who supplies what customers demand, does so without even paying attention to what It revolves around it, because it happens all the time.

We also find the man who wears a white robe, we can see him in the team, and we can see him reading in his own book alone, waiting for the coffee man to meet what he needs.

As for the blind man and the child who is accompanying him on the way, they are in the same condition, they are going to relieve their needs, and they give their back to the men who are busy with their problem.

Of course, "Rudolf Johan Weis" was keen to draw the "Mameluke" style of the cafe, to indicate his pure Egyptian.