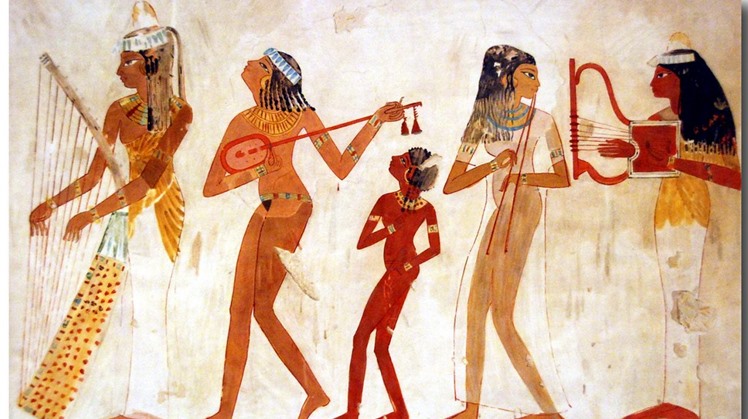 Thu, Apr. 30, 2020
The world celebrates today, the International Dance Day, which was introduced by the World Dance Council in 1982, a non-governmental organization and attracted the attention of a wider range of audiences to the art of dance. So did the ancient Egyptian civilization that left a rich heritage known to dance?

Dr. Hussein Abdel-Basir, director of the Museum of Antiquities of the Library of Alexandria, said that the sources that dealt with dancing in ancient Egypt are very rare, as it seemed to the ancient Egyptians that it was not necessary for his book to express something familiar to them.

Dr. Hussein Abdel-Basir explained, we note that there are many words in the ancient Egyptian language that carried the meaning of "to dance", most notably the word "epa". Likewise, other terms have appeared describing specific dances or movements, but they come in contexts that tell little or even describe in a way The rare nature of the dances that were performed.

He continued, "Abdel-Basir" dancing was a common practice in popular culture in ancient Egypt, so it is rare to describe it, and there are many obstacles that meet one to find out the purpose of dancing and the contexts during which dancing was in ancient Egypt, especially with regard to the reenactment of any of the movements That was performed.

Dr. Hussein Abdel-Basir refers mostly to the available drawings of dancers from ancient Egypt, two-dimensional, and their source is the walls of temples, tombs, or even scenes drawn on pieces of ostraca or papyrus, and these drawings have been linked to the traditions of ancient Egyptian art and did not provide enough space for flexibility to show The extent of the flexibility that is performed during dancing, as well as there was another issue, which is that the photographic scenes were not intended to record with the aim of informing the viewer of the dances or their nature but were intended for further purposes such as expressing ritual worship to God, or as a ceremony to facilitate the passage of the world The other one.
Dr. Hussein Abdel-Basir said, it must be taken into account that the ancient Egyptian civilization lasted for more than three thousand years, and that it was one of the conservative civilizations, it must be pointed out that the idea of ​​changes and developments of dance occurred during the course of this civilization, and it is considered the oldest scenes of dance in ancient Egypt that appeared On the rock pieces and pottery vessels from the pre-dynastic era, as well as scenes of dance from the era of the Old Kingdom showing singers and dancers in a funeral scene at the entrance to a cemetery.

In the era of the Middle Kingdom, Abd al-Basir explained, the scenes depicted in the tombs of Bani Hassan and Deir al-Jabrawi show movements that appear to be more acrobatic than dance moves. As for the gods, some of them were associated with dance, such as the goddess Hathor and her son Horus the little "Ihya" was associated with music Dancing, and the dancers appeared carrying musical instruments dedicated and sacred to the goddess Hathor. Likewise, the deity was associated with dancing, and he appeared dancing and playing musical instruments. Perhaps this is a clear indication of the scenes that photographed the dwarves performing the dance.

Dr. Hussein Abdel-Basir concluded, although the majority of the remaining scenes of dance from ancient Egypt express religious rituals or funerary rituals, but this is not conclusive evidence that it was confined only to these rituals but rather necessarily had a fundamental presence in the daily life of the ancient Egyptian In a number of scenes, dancers appeared in the banquets dancing to the tunes of the musicians, and the dancers appeared wearing necklaces, bracelets and earrings, as well as they appeared wearing eyeballs and their expressions seemed to be professional.