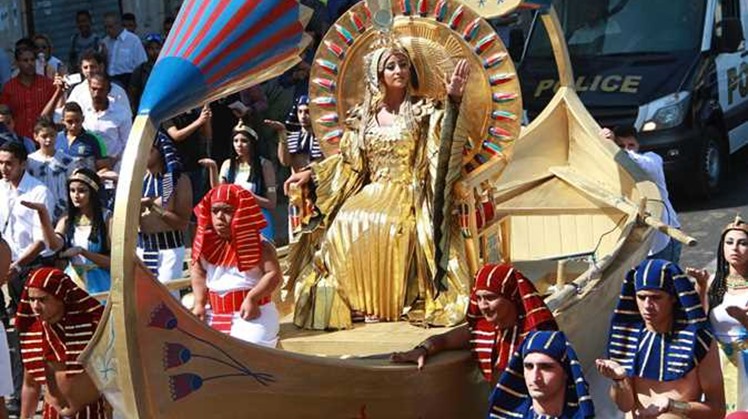 Wed, Jan. 8, 2020
The Ministry of Tourism and Antiquities, under the leadership of Dr. Khaled Al-Anani, is preparing to transfer mummies from the current place of display at the Tahrir Museum to the place of permanent display in the National Museum of Egyptian Civilization in Fustat, during the next few period, as it is being prepared for transport in a global procession befitting ancient Egyptian civilization, and the number of mummies 22 mummy and 17 royal coffins to be transported.

Equipment for the transport of mummies is prepared, and therefore the Ministry of Tourism and Antiquities is considered an ancient Egyptian costume, worn by individuals accompanying the procession. War wheels similar to the old Egyptian war wheels were manufactured, along with playing musical pieces, in addition to unifying the color of building paints located on the highway of transporting the mummies, so that The event exit in front of the worker in a world class fashion, befitting the history of ancient Egyptian civilization.

The Ministry of Tourism and Antiquities is also working to transmit the event through a large group of local and international media, to send a message to the whole world, that Egypt is a great civilized history, and that the event is not limited to being only for transporting mummies, but it carries many goals, which are scenes The world Egypt and its clean streets, and the formation of the new Tahrir Square after the installation of sculptures of rams, and the obelisk removed from the maintenance of stone.

The transfer works of 22 mummies and 17 royal coffins from the current place of display at the Editorial Museum to the place of permanent display in the National Museum of Egyptian Civilization in Fustat, will take place within the next 3 months.

It is worth noting that the second coordination meeting was held to discuss the procedures for transferring royal mummies and sarcophagi from the current place of display in the Egyptian Museum in Tahrir to the place of permanent display in the National Museum of Egyptian Civilization in Fustat, during the month of August, at the headquarters of the Museum of Civilization, during the past month, and in the presence of representatives from the ministries of defense , Interior, Tourism, Cairo Governorate, Security Agencies, and the Supreme Council of Antiquities.

During the meeting, many topics related to the mummy transport line were discussed, raising the efficiency of roads from the Liberation Museum to the Museum of Civilization, in addition to the exit and entry places for the vehicles that will carry out the transfer, in addition to discussing the organization of the procession line inside the Museum of Civilization after arrival.