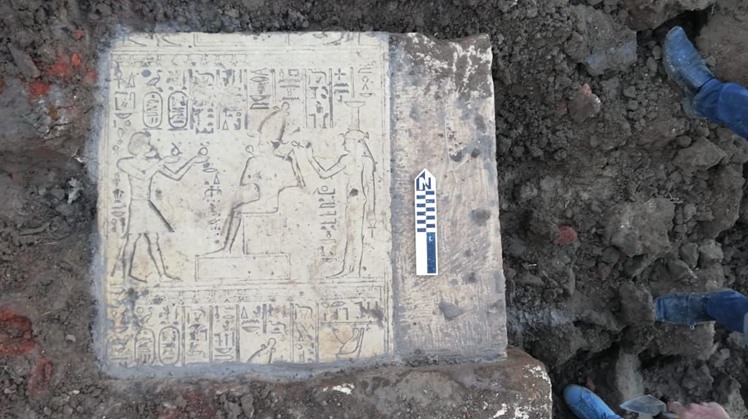 Wed, Jan. 8, 2020
The Rescue Excavations Mission in the village of Kom Ashqou, affiliated to the Tama Center in Sohag, found today, 5 archaeological blocks of limestone of various sizes while digging the foundations of a police station and a civil registry in the same area. Dr. Frederica El Sayed, Director General of Egyptian Antiquities in Sohag, said that the archaeological blocks were placed In Ptolemy the Fourth Temple in the village's market area, it may be transferred to the Ministry of Antiquities store.

The chief antiquities inspector in Sohag added that the work team there is made up of 4 people with equipment for antiquities, and was part of a project to drill the foundations of the police point and the civil registry, so the archaeological blocks were discovered, which are movable blocks that were lying in the mud in their place, noting that the blocks are private King Ptolemy the First provides offerings to many deities, which are blocks of different sizes between 80 to 100 cm, and the place was completely cleaned after the completion of placing the blocks in the vicinity of the temple.

On the other hand, the security forces in Sohag imposed under the supervision of Major General Hassan Mahmoud, director of security, as well as the Antiquities Authority in the Governorate, a security cordon around the temple surrounding the area after the discovery of archaeological blocks until the necessary measures were taken by the Ministry of Antiquities.

Dr. Mustafa Waziry, Secretary-General of the Supreme Council of Antiquities, said in a statement today that the blocks were moved to the recently discovered Ptolemy IV Temple in the market area of ​​the same village, where the restorers undertook the first cleaning work and that the first study and examination of the stone blocks and the scenes and texts inscribed on them indicate that The blocks belong to a shrine of the god Osiris, dating back to the era of King Ptolemy the First, where they were decorated with three rows of scenes, and a number of titles were engraved on them, namely: Ibn al-Shams (Ptolemy), the king of the tribal and sea sides (Step-in-Ra-Mari-Amun).

As for the fourth and final block, it bears evidence of the existence of three rows of scenes that represent King Ptolemy in front of the idol Osiris, who sits on the throne, and behind Osiris stands a deity or idol, and the upper row is completely missing, leaving only the legs of the king and the base of the throne of the idol Osiris and the feet of the idol standing behind him, As for the middle row, it contains the fully preserved scene, and King Ptolemy represented two scrolls to the idol Osiris who sits on the throne and the god Nephthys standing behind him, and the two scrolls may contain green eye paint known as the face or the face, and the bottom row of the block, leaving only the end Its upper, which can through crowns and texts saved recognize that the scene represents King Ptolemy in advance to the idol of Osiris, who sits on the throne and the idol of Horus standing behind him.