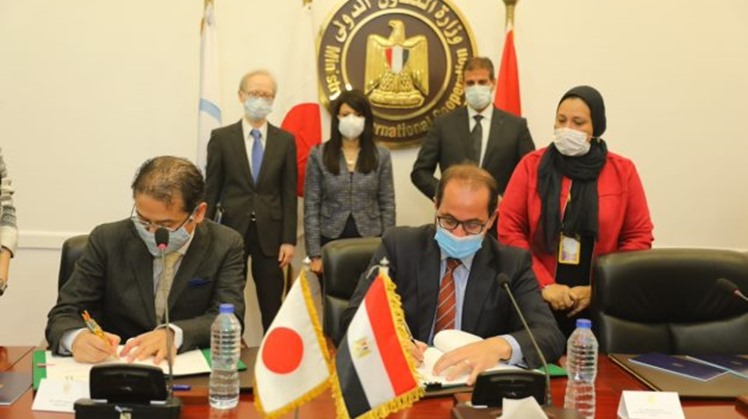 The signing was witnessed by Ambassador of Japan to Egypt, Masaki Noke, Minister of International Cooperation, Rania Al Mashat, and first Undersecretary of Ministry of Electricity and Renewable Energy; Ahmed Mohina on behalf of Minister of Electricity, Mohamed Shaker.

According to JICA, the finance comes at an important timing amid the global challenges of COVID-19 pandemic.

It added that the funding is expected to boost the liquidity for Egypt while supporting critical reforms for improving the governance and financial sustainability of power sector, boosting green growth and renewable energy and moving towards a competitive market for enhanced private sector participation.

The Development Policy loan is a co-financing program in partnership with the African Development Bank (AfDB); as a first collaboration in Egypt under the 4th phase of the Enhanced Private Sector Assistance for Africa (EPSA) initiative – announced by the Government of Japan and the AfDB in the Tokyo International Conference on African Development (TICAD 7) and is also in collaboration with the French Development Agency for a collective financing of Euro 500 million from the 3 partners.

JICA noted that this program is encouraging the continuation of the reform efforts especially amid COVID- 19, which threatens to hinder the progress of the different economic sectors including the power sector in Egypt.

It clarified that the Government of Egypt has adopted an economic reform program that includes ambitious energy sector reforms since 2014, which achieved good results, helping Egypt in dealing with external shocks.

“The objective of the program is to enhance sustainability and stability in the power sector through supporting policy reforms such as i) improving both governance and financial sustainability and ii) promoting energy efficiency and renewable energy for green growth thereby contributing to the promotion of economic stabilization and development efforts for the Arab Republic of Egypt,” JICA stated.

JICA Chief Representative, Omura Yoshifumi pointed out that the current DPL represents a significant step towards further consolidation of relations with the Government of Egypt not only to develop energy sector and promote renewable energy, but also as a sign of international support given the challenges imposed on Egypt due to the COVID-19.

Omura also hailed the long fruitful relationship with the Ministry of Electricity and Renewable Energy and the continuous support of Mohamed Shaker; aspiring for further strengthening of cooperation through implementation of the forthcoming project for PV Power Plant in Hurghada including first ever application of battery storage in Egypt.

He also extended appreciation to the efforts of the Minister of International Cooperation and the Minister of Finance that led to strengthening the partnership between Egypt and Japan. The Egyptian ministries expressed sincere gratitude for the longstanding cooperation with JICA and the Government of Japan for a wide and diversified portfolio.