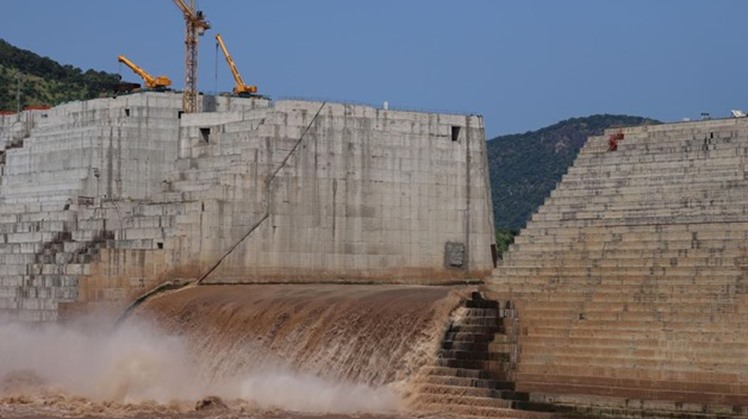 Wed, Dec. 25, 2019
CAIRO – 25 December 2019: Egypt stressed adherence to its proposal regarding filling and operating the Grand Ethiopian Renaissance Dam, the Ministry of Water Resources said, after “malicious” reports claiming that Egypt abandoned one of its main conditions.

Egypt affirms its keenness, during negotiations around the (Grand Ethiopian) Renaissance Dam, to reach understanding and agreement with both Sudan and Ethiopia regarding the rules for filling and operating the dam, especially during periods of drought and prolonged drought, the ministry said in a statement.

It also confirms endeavor to reach a compromise formula that achieves the interest of the three countries, represented in the right of Ethiopia to achieve the development that it seeks, in a way that does not represent a grave danger to Egypt and ensures the flow of water to it (the Egyptian land) and guarantees (Egypt’s) right of life.

Egypt has presented an alternative formula to link the two dams (GERD and Egypt’s Aswan High Dam), in the interests of both sides.

The ministry has denied recent reports regarding Egypt's abandonment of its condition to have 40 billion cubic meters of Nile water annually, as part of negotiations to fill and operate GERD.

It is necessary to clarify that Egypt is demanding the passage and flow of 40 billion cubic meters annually from the Blue Nile River, which is the average during periods of drought and prolonged drought, as a similar case to what happened during the period from 1979 to 1987, the statement read.

The Egyptian, Sudanese and Ethiopian water resources and irrigation ministers agreed to continue their technical discussions on all unresolved issues concerning the Grand Ethiopian Renaissance Dam (GERD) project during their next meeting on January 9-10 in Addis Ababa, according to an Egyptian government statement earlier in December.

Egypt and Ethiopia are at loggerheads over the $4-billion dam; Cairo voiced concern over its water share [55.5 billion cubic meters] after Ethiopia started building the dam on the Blue Nile in May 2011. A series of tripartite talks between the two countries along with Sudan began in 2014. One year later, the three countries signed the Declaration of Principles, per which the downstream countries [Egypt and Sudan] should not be negatively affected by the construction of the dam.

However, Cairo has blamed Addis Ababa for hindering a final agreement concerning a technical problem, calling for activating the Article No. 10 of the Declaration of Principles, which stipulates that if the three countries could not find a solution to these differences, they have to ask for mediation.

Later, the United States sent an invitation to the three countries to resume the talks. Meetings were held with foreign and water ministers of Egypt and Upper stream countries, in the presence of United States Secretary of Treasury Steven Mnuchin and a representative from the World Bank.

President Donald Trump praised the meeting with the top representatives ofthe three countries, saying on his Twitter that it “went well and discussions will continue during the day!”

President Abdel Fatah al-Sisi also lauded the constructive and pivotal role played by President Trump and the US, which reflects the depth of the strategic relations between Egypt and the United States. The president said that this would contribute to reaching an agreement on the filling and operation of GERD and promoting stability and development in East Africa.