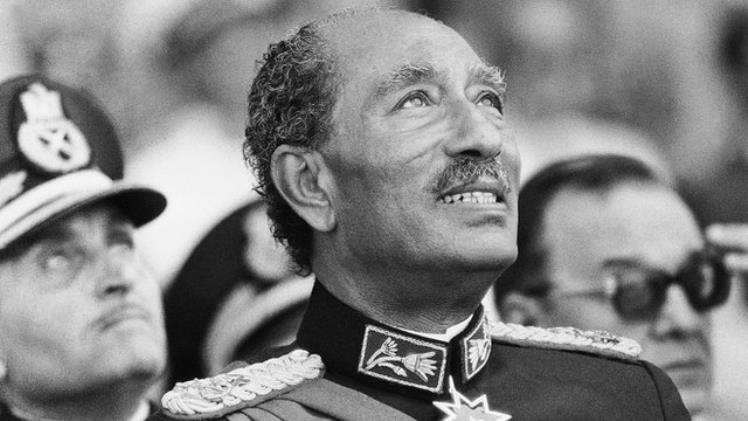 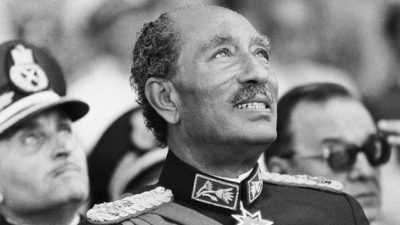 This Act may be cited as the “Anwar Sadat Centennial Celebration Act”.

(2) In 1938, Sadat graduated from the Royal Military Academy in Cairo and was appointed to the Signal Corps. 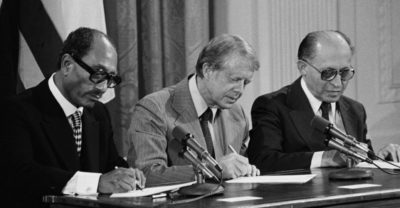 (3) Sadat entered the Army as a second lieutenant and was posted to Sudan where he met Gamal Abdel Nasser and fellow junior officers who became the ``Free Officers'' who led the Egyptian revolution of 1952.

(4) Sadat held various high positions during Nasser's presidency, assuming the role of President of the National Assembly in 1960 and Vice President in 1964.

(5) President Nasser died of a heart attack on September 28, 1970, at which point Sadat became acting President. Sadat was subsequently elected as the third President of Egypt.

(6) On October 6, 1973, President Sadat, along with his Syrian counterparts, launched an offensive against Israel. A permanent cease-fire was reached on October 25, 1973. 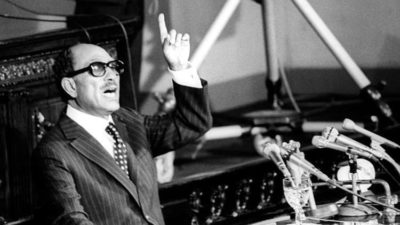 (7) In 1974, after talks facilitated by Secretary of State Henry Kissinger, Egypt and Israel signed an agreement allowing Egypt to formally retrieve land in the Sinai. President Sadat later wrote in his memoirs that his meetings with Kissinger ``marked the beginning of a relationship of mutual understanding with the United States culminating and crystallizing in what we came to describe as a `peace process'. Together we started that process and the United States still supports our joint efforts to this day''.

(8) Months of diplomacy between Egypt and Israel followed the signing of this initial agreement and a second disengagement agreement, the Sinai Interim Agreement, was signed in September of 1975.

(9) President Sadat addressed a joint session of Congress on November 5, 1975, during which he underscored the shared values between the United States and Egypt. In this speech, President Sadat addressed the path to peace, saying, ``We are faced, together with other nations, with one of the greatest challenges of our time, namely the task of convincing this generation, and those to follow, that we can finally build a viable international system capable of meeting the demands of tomorrow and solving the problems of the coming age''.

(10) On November 19, 1977, President Sadat became the first Arab leader to visit Israel, meeting with the Israeli Prime Minister, Menachem Begin. President Sadat spoke before the Israeli Knesset in Jerusalem about his views on how to achieve comprehensive peace in the Arab-Israeli conflict. 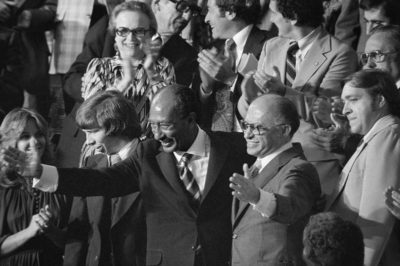 (11) Before commencing negotiations, President Sadat courageously announced to the Knesset,  `I have come to you so that together we might build a durable peace based on justice, to avoid the shedding of 1 single drop of blood from an Arab or an Israeli. It is for this reason that I have proclaimed my readiness to go to the farthest corner of the world''. President Sadat further poignantly stated that `any life lost in war is a human life, irrespective of its being that of an Israeli or an Arab. * * * When the bells of peace ring, there will be no hands to beat the drums of war''.

(12) On September 17, 1978, President Jimmy Carter hosted President Sadat and Prime Minister Begin at Camp David where the 3 leaders engaged in 13 days of negotiations that resulted in the `Framework for Peace in the Middle East'' (commonly known as the Camp David Accords''). 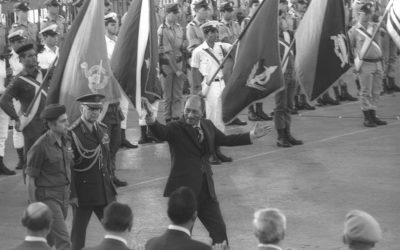 (14) The Peace Treaty featured mutual recognition of each country by the other and ultimately the cessation of the state of war that had existed between Israel and Egypt since the 1948 Arab-Israeli War. Israel completely withdrew its armed forces and civilians from the rest of the Sinai.

(15) In 1978, both President Sadat and Prime Minister Begin were awarded the Nobel Peace Prize for signing the Peace Treaty, which made Egypt the first Arab country to officially recognize Israel.

(16) While presenting the Nobel Peace Prize to President Sadat, Aase Lionaes, Chairman of the Norwegian Nobel Committee, said, ``During the 30 preceding years, the peoples of the Middle East have, on 4 separate occasions, been the victims of warfare and there seemed no prospect of peace. President Sadat's great contribution to peace was that he had sufficient courage and foresight to break away from this vicious circle. His decision to accept Prime Minister Menachem Begin's invitation of November 17, 1977, to attend a meeting of the Israeli parliament on November 19 was an act of great courage, both from a personal and from a political point of view. This was a dramatic break with the past and a courageous step forward into a new age''.

(17) During his Nobel lecture, President Sadat remarked, ``I made my trip because I am convinced that we owe it to this generation and the generations to come not to leave a stone unturned in our pursuit of peace''.

(18) In remarks to the People's Assembly in Cairo on March 10, 1979, President Carter praised President Sadat, telling the Assembly, `Your President has demonstrated the power of human courage and human vision to create hope where there had been only despair.''. President Carter also said that the Peace Treaty would `strengthen cooperation between Egypt and the United States'' and underscored the support of the United States for the agreement, saying, ``I fully share and will support President Sadat's belief that stability must be maintained in this part of the world * * * He and I recognize that the security of this vital region is being challenged. I applaud his determination to meet that challenge, and my Government will stand with him''.

(19) The signing of the Peace Treaty enraged many individuals who opposed normalized relations with Israel. President Sadat was assassinated on October 6, 1981, by Khalid Islambouli, a member of Egyptian Islamic Jihad. President Sadat was well aware of the controversy to which his actions would lead, but pushed for peace anyway.

(20) Upon the death of President Sadat, President Ronald Reagan proclaimed, ``President Sadat was a courageous man whose vision and wisdom brought nations and people together. In a world filled with hatred, he was a man of hope. In a world trapped in the animosities of the past, he was a man of foresight, a man who sought to improve a world tormented by malice and pettiness''.

(21) President Sadat is recognized in the United States and throughout the world as a respected leader and champion of peace whose vision provided a roadmap for the peaceful resolution of conflict that endures nearly 40 years after its inception.

(22) President Sadat bravely reached out to Israel and dedicated himself to peace, furthering the national security of Egypt and the stability of the Middle East.

(23) On the 30th anniversary of the Peace Treaty, President Barack Obama praised the enduring legacy of the Camp David Accords and the `courage and foresight of these leaders, who stood together in unity to change the course of our shared history''. President Obama closed by saying, `Today, as we seek to expand the circle of peace among Arabs and Israelis, we take inspiration from what Israel and Egypt achieved 3 decades ago, knowing that the destination is worthy of the struggle''.

(24) The Camp David Accords and the Peace Treaty continue to serve the interests of the United States by preserving peace and serving as a foundation for partnership and dialogue in a region fraught with conflict and division.

SEC. 3. CONGRESSIONAL GOLD MEDAL. (a) Award Authorized.--The Speaker of the House of Representatives and the President pro tempore of the Senate shall make appropriate arrangements for the posthumous award, on behalf of Congress, of a gold medal of appropriate design to Anwar Sadat in recognition of his achievements and heroic actions to attain comprehensive peace in the Middle East. (b) Design and Striking.--For the purpose of the award referred to in subsection (a), the Secretary of the Treasury (referred to in this Act as the ``Secretary'') shall strike  a gold medal with suitable emblems, devices, and inscriptions to be determined by the Secretary. (c) Presentation. — 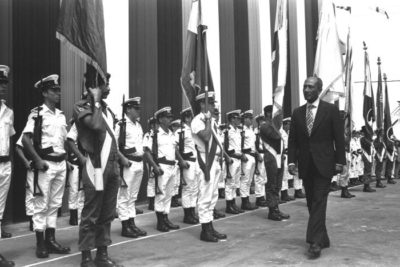 Senate and House of Representatives