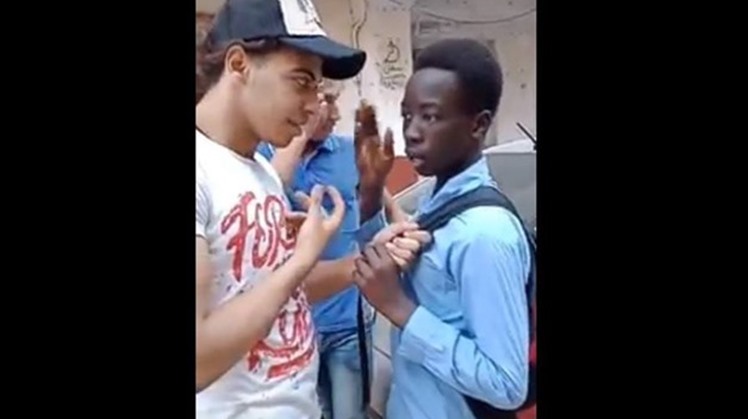 Fri, Dec. 13, 2019
CAIRO - 21 November 2019: World Youth Forum sent an official invitation to the Sudanese refugee, who was subjected to bullying by some youth, to attend the sessions of the forum.

The World Youth Forum will be held from December 14-17 in Sharm el-Sheikh.

The police arrested the defendants after a video circulated on Tik Tok application, showing two young boys verbally abusing and bullying a young South Sudanese student, mockingly telling him to take “one beautiful photo” with them and refusing to let him leave for school.

Meanwhile in Egypt a #SouthSudanese refugee student is ridiculed, humiliated and is stripped off his phone, books and bag. Even in refuge there is no peace @RadioMiraya @AnaTabanSS I have no words pic.twitter.com/SXMyaB93jt

Under the auspices of the National Council for Childhood and Motherhood (NCCM), Egypt’s first national campaign calling to end peer-to-peer violence was launched in 2018 in partnership with the Ministry of Education and Technical Education (MOETE) in cooperation with the United Nations Children’s Fund (UNICEF) and funded by the European Union (EU).

Bullying is a type of violence intentionally and repeatedly exercised by a child on another child in person or online, ranging from physical harm to verbal and psychological abuse which can lead to exclusion, depression and sometimes suicide. It is a terrible phenomenon against which several actors have decided to join hands.

“No child should experience the anxiety and hurt that bullying puts them through, which – just as all types of violence against children – is likely to impair healthy brain development, cause low self-esteem and in severe cases can lead to suicidal feelings.

This campaign urges children, parents and caregivers to speak up against bullying in educational and non-educational settings and seek guidance from trained professionals through the national Child Helpline 16000 that provides 24/7 support and is also an active channel to report severe cases in which the safety of a child is at risk,” stated Dr. Azza al-Ashmawy, Secretary-General of NCCM.

According to the latest global data, slightly more than 1 in 3 students aged 13-15 around the world experience bullying. While girls and boys are equally at risk of being bullied, girls are more likely to become victims of psychological forms of bullying and boys are more at risk of physical violence and threats.

A study conducted by NCCM and UNICEF in 2015 on three governorates showed that the highest level of violence facing children occurs at home, followed by school with 29 to 47 percent of children (aged 13-17) reported that physical violence among peers was commonplace.