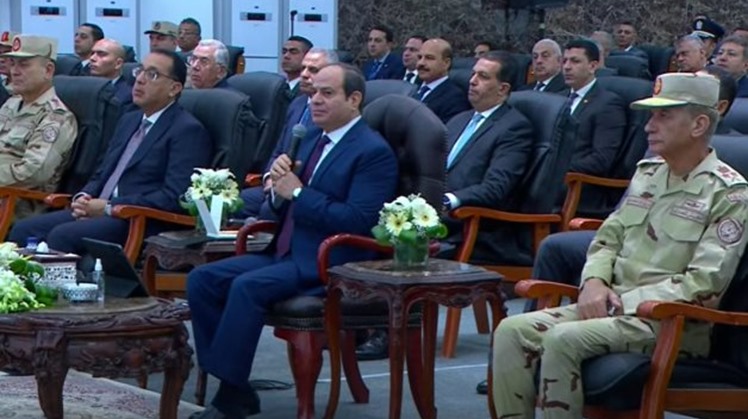 Mon, Dec. 5, 2022
Egypt’s President Abdel Fattah al Sisi inaugurated on Monday Al Ta’amier axis in Alexandria governorate along with other national projects including Misr Train Station in Alexandria after its renovation, a project to upgrade the railway signal system on the Cairo/Alexandria railway line along with 'Bashayer Al-Khair 2 ' and 'Masharf Al-Amriyah' projects.

He noted that with the current population growth rate we would need annually to provide 3 million jobs, “which is something we can’t afford easily”.

He also confirmed that citizens do not pay the real cost of electricity, gas or fertilizers, because it is a cost that neither factories nor citizens will be able to bear.

He commented during the presentation of Minister of Transport Kamel El-Wazir, that Al Nubaria axes could have been implemented since nearly a year at a much lower cost except for the road violations.


“We had to pay more than 800 million as compensation to people though they were originally violating the road” Sisi said.

President Sisi directs NGOs, civil society and ministry of interior to keep following up with the lives of residents in residential projects such as Bashayer Al-Khair, Al Asmarat and Masharf Al-Amriya, to provide them a decent life continuously.

Regarding the development El Montazah, Sisi stressed that “everything we did was for the best and in order to preserve our heritage. El Montazah is open to everyone.”

President Abdel Fattah Sisi said that 500,000 to 1 million housing units will be built in Alexandria in the coming years.

During the inauguration, daughter of late Lt. Gen. Fouad Abu Zekri has thanked President Abdel Fattah Al Sisi for naming an Axis in Alexandria after her father. Laila said she is ‘very grateful for that honor, which comes 50 years after the October War, in which her father was one of the leaders.’

President Sisi began later an inspection tour for the inaugurated projects in Alexandria and posed for a group photo.

Addressing the inauguration ceremony, Minister of Planning and Economic Development Hala El Saeed said the world has been facing several crises and successive shocks over the past few years which led to disruption in the supply chain and prices hikes since the end of 2021.

Then a documentary film was screened to highlight the huge leap achieved in Egypt's transport sector in view of the great interest the political leadership has been attaching to such vital sector and as part of the state's comprehensive development plan across the nation.

The development of the transport system in Egypt complies with the state's comprehensive development strategy for 2030 with the objective of achieving a great economic growth and urban flourishing.