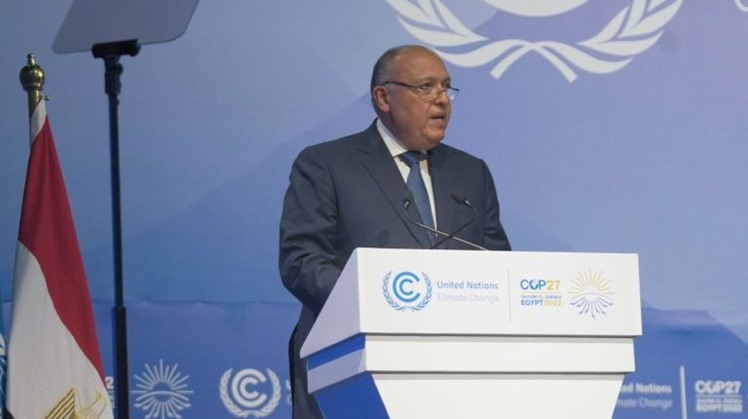 Fri, Nov. 18, 2022
President of the 2022 UN Climate Change Conference (COP27) and Egyptian Foreign Minister Sameh Shoukry announced today extending the proceedings of the conference until Saturday as he vowed to work on achieving the desired outcome.

Heading a COP27 session on Friday, Shoukry affirmed that the conference’s presidency will not give up on the goal of achieving the desired climate pledges.

Shoukry pointed out efforts are being exerted to achieve the goals of all parties and progress at all levels, asserting that the climate summit's outcomes would be constructive.

The COP27 president expressed concerns about a number of outstanding issues related to climate finance, which need to be settled during the conference.

COP27 held in Sharm El-Sheikh city starting from 6 November under the theme “Together for Implementation” was set to conclude its proceedings on Saturday.

The Egyptian presidency of the conference has repeatedly vowed to work on turning climate pledges into real action on the ground, including by ensuring that developed countries fulfill their climate commitments regarding finance and loss and damage.

On Thursday, the presidency released an unofficial sketch regarding elements discussed during the conference. However, the sketch was criticized for not giving enough details about the loss and damage issue and fossil fuel phase out.