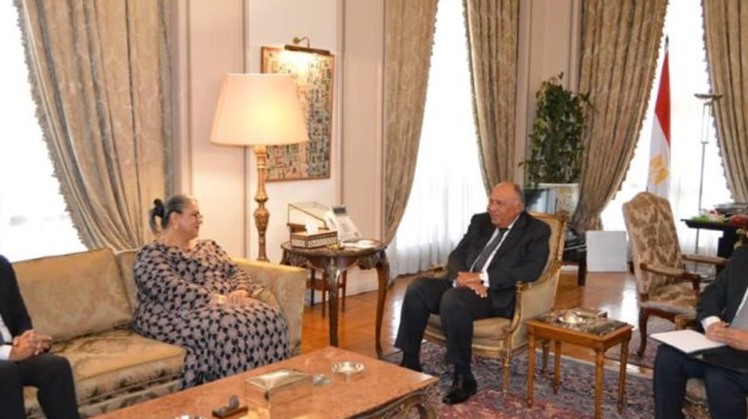 Sun, Sep. 11, 2022
CAIRO – 11 September 2022: Egypt's Foreign Minister Sameh Shoukry held a meeting, on Sunday, with the United Nations Envoy for the Horn of Africa, Hanna Serwaa Tetteh, to discuss the stalemate of the negotiations over the controversial Grand Ethiopian Renaissance Dam (EGRD) and the latest developments in Sudan and South Sudan, said Egyptian Foreign Ministry spokesperson Ahmed Abu Zeid in a statement.

The dispute over the GERD between Egypt, Sudan, and Ethiopia dates back to May 2011 when Ethiopia started building the dam; Egypt voiced concern over its water share [55.5 billion cubic meters]. Since 2014, the three countries have gone into negotiations to reach a final agreement on the processes of operating the dam and filling its reservoir with the Nile Water. However, the talks have stalled because of disagreement on technical points. Ethiopia took unilateral actions and filled the dam’s reservoir three times since 2020.

The Sunday meeting tackled ways to defend African interests during the upcoming COP 27 conference that the Egyptian authorities are working around the clock to host, on behalf of the African continent, in Sharm El-Sheikh on November 6-18, 2022.

This year's international gathering aims to establish legally binding commitments for developed countries to reduce greenhouse gas emissions. Egypt focuses on urgent and priority issues in the African continent, in particular, and in developing countries in general, such as adaptation and climate finance.

“Egypt looks forward to building on the outputs of Glasgow to set a global goal for adaptation according to the 'from Glasgow - Sharm El Sheikh' work program, especially after the completion of the Paris Rulebook,” said the Ministry of Environment in a statement.