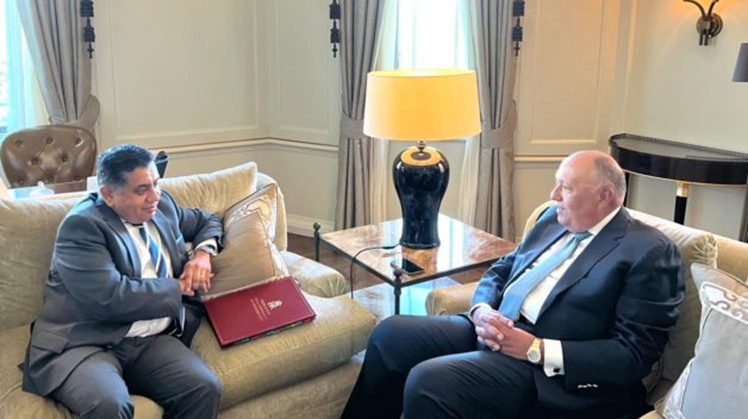 Shoukry has been in an official visit to London to launch the first partnership council between Egypt and the United Kingdom, a statement by the Egyptian Ministry of Foreign Affairs read.

During their meeting on Monday, the two ministers highlighted the great importance of the new council, saying it would contribute to enhancing fields of joint work, especially cooperation in economic fields.

The council will also help boosting British investments in Egypt and trade exchange between the two countries and exploring further bilateral cooperation opportunities.

The ministers also discussed the implications of the current global economic crisis and means of cooperation to mitigate the effects of the crisis.

Shoukry welcomed the open dialogue between Egypt and the UK on various issues of mutual concern, the statement said.

Shoukry and Lord Ahmad also discussed the upcoming International Ministerial conference on the Freedom of Religion or Belief, which is to be held in London from 5-6 July.

In this regard, Shoukry affirmed Egypt’s effective participation in the conference, highlighting the achievements and efforts that Egypt has made to enhance freedom of belief.

Shoukry also highlighted Egypt’s keenness to enhance the principles of citizenship, equality, and non-discrimination between citizens on any basis.

The ministers also discussed their concerns about the situation of human rights as well as regional and international issues of mutual interest, including the situation in Libya, the statement said.

They reviewed the preparations for Egypt’s hosting of the UN Climate Change Conference (COP27) in November in Sharm El-Sheikh city, affirming the need to continue coordination between the Egyptian and British presidencies of the climate conference to achieve success at COP27.

Egypt is preparing to host COP27 from 6-18 November in coordination with international partners with the aim of implementing the commitments and pledges made by the various parties involved in climate action in line with the Paris Agreement.