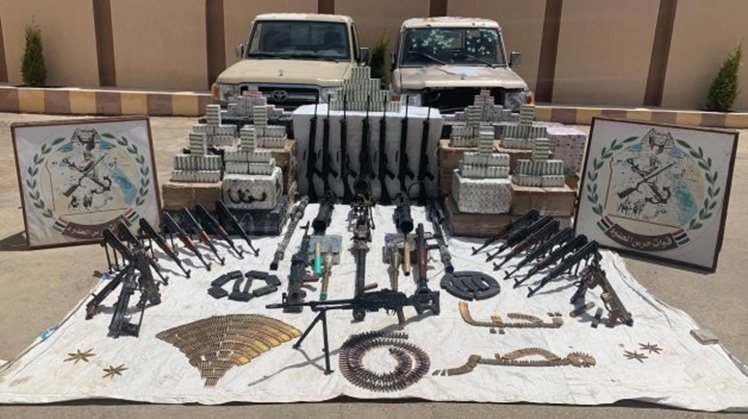 Mon, May. 9, 2022
CAIRO – 9 May 2022: The Egyptian Army’s Border Guards succeeded to foil an attempt to smuggle a large shipment of weapons, ammunition and drugs during their operations in the Great Sand Sea area south of Siwa Oasis.

According to a statement by the Egyptian Armed Forces spokesman on Monday, the border guards managed to seize two four-wheel drive vehicles without license plates that are used by the terrorist elements for operations of smuggling and infirtlation.

This is in addition to seven sniper magazines, two RPG rockets, 1,162 bullets, and a telephone used for communication via satellite.

The forces also managed to seize a million drug tablets and legal measures were taken against the smugglers, the spokesman added.

The border guard forces continue to exert their intensive efforts against outlaws and impose security and control on all strategic directions of the state to secure Egypt's borders,” the spokesman said.

He added that this comes in conjunction with the intensification of tightening procedures and control over all the state's border crossings and ports.

The spokesman affirmed that the latest operations came “in continuation of the efforts of the border guard forces in inflicting mortal blows on criminal elements and smugglers and to abort plans and attempts aimed at harming society and the Egyptian national security on all strategic directions of the state”.