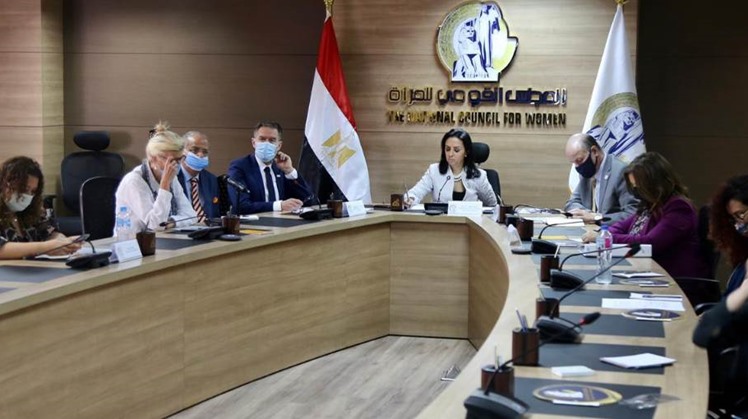 Tue, Jun. 15, 2021
CAIRO – 14 June 2021: On the Egyptian National Day for Eliminating Female Genital Mutilation (FGM), June 14, which marks the day that witnessed the murder of a girl named “Bdour” in Minya Governorate in 2007, The National Committee for FGM Elimination, co-chaired by the National Council for Women and the National Council for Childhood and Motherhood, celebrates the anniversary of this day, in light of a great achievement for the rights of girls and women in Egypt, with the ratification of Law No. 10 of 2021 amending some provisions of the Penal Code to tighten the penalty of FGM.

Chairing the Committee’s virtual meeting, President of the National Council for Women [NCW], Maya Morsi, started her speech saying that “the political has triumphed for the Egyptian women over these harmful practices, as the punishment was tightened for everyone who performed FGM, and for everyone who requested it.”

Morsi extended her appreciation to President Abdel Fattah El-Sisi, for his permanent and strong support for Egyptian women and for ratifying the amendment of the law, believing that empowering and protecting women is a national duty.

Morsi also thanked Prime Minster Mostafa Madbouly for the Cabinet's approval of the draft law submitted by the National Committee and to the Egyptian Parliament in its two chambers.

She also thanked the Ministry of Justice for its fruitful cooperation to amend the articles of FGM, and the Attorney General who ‘presented an exceptional model protecting Egyption women’.

Secretary-General of the National Council for Childhood and Motherhood Sahar Al-Sunbati said that this day on which the little girl [Bdour] was killed as a result of FGM crime has greatly contributed to ‘breaking the silence’ and was a great awakening call.

Sonbaty praised the Committee’s efforts which comes in line with the strategic framework and the National Plan for s of Egypt's Vision 2030.

During the meeting, Deputy Executive Director of the United Nations Population Fund (UNFPA) Ib Petersen, congratulated the NCW, the National Council for Childhood and Motherhood and other national partners for the formation of the National Committee for the Elimination of FGM, which has made great efforts during the past two years that have yielded great results, through their joint cooperation with Civil society and development partners.

He pointed out that eliminating this crime requires coordinating all efforts and working according to a specific approach.

Petersen expressed his happiness with the criminalization of FGM in Egypt, and his aspiration to see a strong knowledge base in Egypt to share with other countries where the crime FGM is widespread.

Ambassador Christian Berger, Head of the European Union Delegation to Egypt praised the state's efforts to amend provisions of the Penal Code and to tighten the penalty for FGM, which are essential amendments to achieve progress in eliminating this crime in Egypt.

He stressed the European Union's commitment to continue supporting all Efforts to ensure the elimination of FGM, noting that the Egyptian government is working within a specific agenda and strategy to eliminate this crime in line with the Women's Empowerment Strategy 2030 and the sustainable development goals.

Head of the U.S. Agency for International Development (USAID) in Egypt, Jason Tyler, hailed the committee for its role amending provisions of the penal code to toughen the FGM penalty, noting that USAID in Egypt continues to support the government’s efforts empowering women and girls.

He added that they are committed to continuing cooperation with the NCW, the National Council for Childhood and Motherhood, the National Committee for the Elimination of FGM and all partners to confront this crime and all forms of violence against women.

Elena Panova, The UN Resident Coordinator in Egypt, congratulated the National Committee for EGM Elimination for all its efforts during the past two years.

“I’d like to take this chance to hail the Egyptian government efforts and for amending some of the provisions of the Penal Code to toughen FGM penalty”, Panova said.

Christine Arab, UN women Egypt representative, praised Egypt's efforts through the National Committee for the Elimination of Female Genital Mutilation, ‘which was able to achieve a lot in a short period to eradicate this crime’

She noted that the United Nations is committed to cooperating with the National Committee to Eliminate FGM and continue its efforts.

Jeremy Hopkins, representative of UNICEF, expressed his great admiration for Egypt's efforts during the past period to eliminate FGM

He said that achieving 76 million awareness contacts within two years is a great achievement.

Hopkins also pointed out that Egypt is a ‘leading country’ in confronting FGM crime, affirming that a ‘major change in this file will take place during the next three years, and that ‘the world will benefit from the experience of Egypt in this regard.’

Randa Aboul-Hosn, UNDP Resident Representative in Egypt, thanked the FGM elimination committee for its efforts raising awareness of FGM dangers and that it is in fact a crime against the law.

The National Committee for the Elimination of Female Genital Mutilation was established in May 2019.

The committee includes in its membership representatives from all relevant ministries, judicial authorities, Al-Azhar, the three Egyptian churches and representatives of civil society organizations.

The National Committee is an integral part of the Egyptian state's efforts to protect human rights in general and the rights of women and girls in particular.