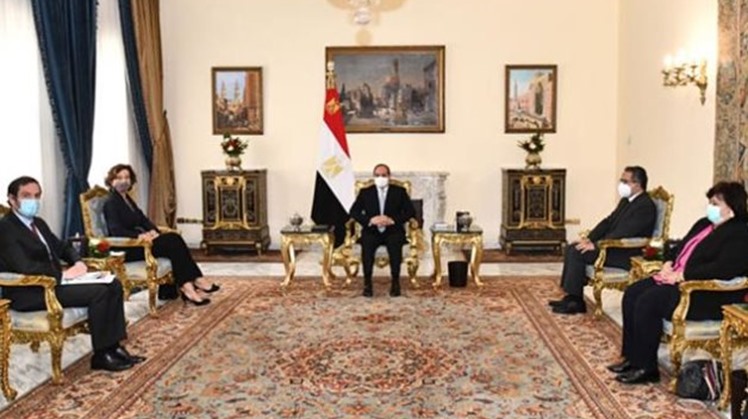 The Egyptian Presidency stated that the President welcomed the visit of the Director-General of UNESCO to Egypt, attending the Pharaohs’ Golden Parade, Radi said, adding that The President commended the continuous support provided by the UNESCO internationally and regionally to the sectors of education, culture and science as well as its efforts to promote and protect antiquities and heritage in Egypt and around the world.

The President also stressed the importance that the state attaches to strengthening cooperation relations with UNESCO, as an extension of the decades-long partnership between the two sides, and for recognizing the vast Egyptian efforts made over the past years to effect a major qualitative leap in highlighting and preserving Egypt’s rich heritage and civilization in all aspects. This includes the development of museums, the creation of a new series of them nationwide to display the largest possible number of Egyptian antiquities, the rehabilitation of archaeological sites and attractions, and the development of the governing and regulatory aspect of the antiquities sector in Egypt.

This is done in order to protect the Egyptian monuments and present them to Egyptians, the peoples of the world and humanity as a whole in the best image befitting the grandeur of the Egyptian civilization.

The President also affirmed that the State has followed a balanced path in this respect between development efforts and the preservation of the value and integrity of the unique archaeological sites, including the development of all historical areas in Cairo. The aim is to make Egypt’s capital an open museum that reflects the legacy of the ancient and contemporary Egyptian civilizations.

For her part, Ms. Azoulay expressed her honor to meet President El-Sisi. She expressed her profound appreciation for the Pharaohs’ Golden Parade, which presented the rich heritage of Egypt over different ages to the whole world. This event also embodied the effort and great support provided by the Egyptian state under the leadership of President El-Sisi to preserve Egypt's cultural and archaeological heritage. This event is an integral part of the world’s heritage and a civilizational beacon presented to the whole world.

The Spokesman added that the meeting discussed the current and future prospects of cooperation between the two sides, especially in the fields of education and science. They also touched on means to enhance the role of the UNESCO office in Cairo and support the current efforts made by Egypt to make optimal use of its cultural and historical heritage, especially through the mega projects that are carried out in accordance with the highest construction and engineering standards. These projects include in particular the development of Historic Cairo and the establishment of various museums, foremost of which is the Grand Egyptian Museum.