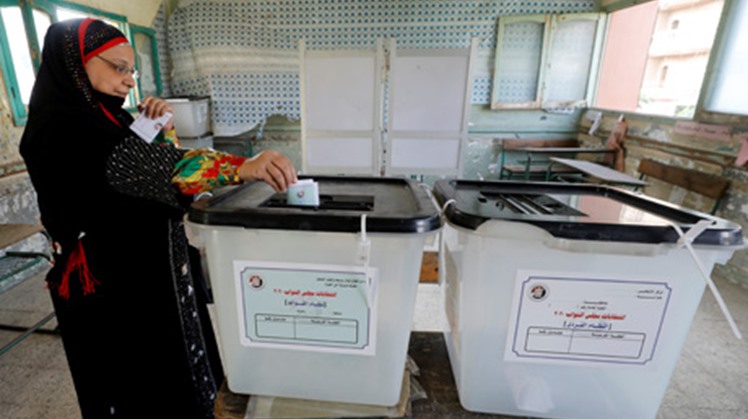 Sat, Oct. 24, 2020
CAIRO - 24 October 2020: Egyptians went to polling stations Saturday morning to vote in the first phase of the new House of Representatives elections, slated at home for Saturday and Sunday.


The results of the elections to be announced on November 15, according to the National Elections Authority (NEA).

Queues of voters were seen outside polling stations, wearing masks as part of the precautionary measures maintained during the process to prevent the spread of the Coronavirus pandemic.


A total of 10,140 judges are delegated to monitor the voting process during the first phase.


The Board of Directors of the Egyptian Judges Club formed a central operation room at the club’s premises on Champollion Street to monitor the conduct of the House of Representatives elections, starting from the receipt of the envelopes until the end of the polling and counting process.

"The chamber will receive all the complaints and observations made by the judges supervising the electoral process in the first and second stages, and work to solve the problems and provide all the means that enable them to fully perform their national duty," Spokesman for the Judges Club, Mahmoud El-Sayed, confirmed in a statement.


Egyptians abroad cast their ballots online on October 21 to 23. Envelopes of the polling cards are sent to the Egyptian embassy in each country via mail at the embassy's address on the condition that the voters attach copies of their IDs or passports to the voting cards.


The National Elections Authority (NEA) executive body will re-allocate voters to the polling stations of their electoral constituencies after increasing the number of the stations nationwide to limit the spread of the new Coronavirus (COVID-19) pandemic.

According to a statement by the Ministry of Health, voters’ temperature is measured before their entry into the polling stations. Voters with nigh temperature or any respiratory symptoms (coughing and short in breath) will be excluded, and directed to the nearest medical facility.

A total of 1,879 candidates are competing in 71 constituencies on the individual system, and four lists are assigned in the list system, in order to choose 284 candidates for the Parliament’s membership in the first stage of the elections in 14 districts of Giza, Fayoum, Beni Suef, Minya, Assiut, Wadi el-Gadid, Sohag, Qena, Luxor, Aswan, Red Sea, Alexandria, Beheira and Matrouh.

Candidacy for Egypt's House of Representatives elections were opened from September 17 to September 23.

During the Senate election held in August 2020, the number of the eligible voters reached 62,940,165 voters.

The run-off elections for the second phase will be conducted abroad on 5 to 7 December and locally on7 and 8 December. The final results of Egypt’s House elections to be formally announced by the National Elections Authority on December 14.