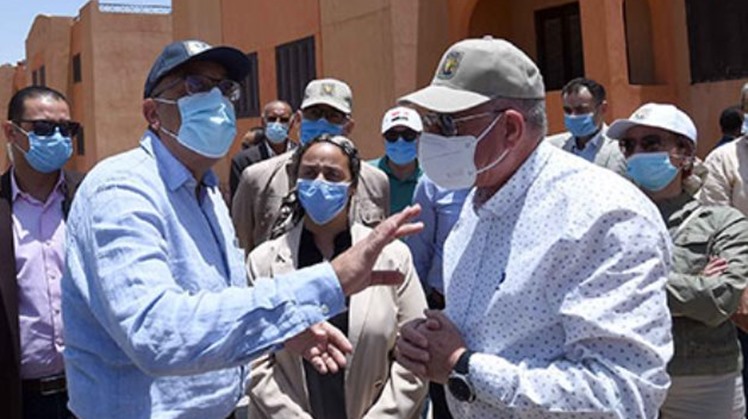 Tue, Jul. 21, 2020
CAIRO – 21 July 2020: In a series of visits to governorates in order to check the progress of national projects and the needs of citizens, Prime Minister Mostafa Madbouli has been to South Sinai's Saint Catherine City on Tuesday accompanied by a number of ministers.

The beginning of the tour was with the airport where he landed as its surface area will be expanded to raise its capacity. Also, a terminal will be built, surveillance cameras will be installed in the road to the airport, and upgrade will take place for flights to operate at night.

The prime minister instructed that the Ministry of Telecommunications and Information Technology improves the cell phone service in the airport's area.

Madbouli later headed to Zaitona District having five greenhouses. The project is worth LE200,000, and funded by the World Food Program and executed by the Arab Organization for Agricultural Development.

The greenhouses spans over 360 square meters, and depend on a lake whose capacity is 200,000 cubic meters. There is also a plan to rehabilitate 10 shallow wells as they will be deepened and cleaned to store lakes water that can be used in irrigation.

The project - targeted at creating job opportunities for Bedouin communities - also includes digging 24 new mountain lakes to harvest rain water. That is in addition to 8 solar energy units in order to lift water from wells.

As part of this project, 50 families are cultivating 2,000 olive trees, 10 families are managing 60 beehives, and 60 cattle are distributed on families. Each family receives two.

The prime minister later visited a housing project that consists of 346 residential units in addition to 100 Bedouin houses accomplished by the Ministry of Housing, Utilities, and Urban Areas.

Madbouli visited Wadi Al Raha having a beautiful nature and that is close from sacred sites. He also visited the cabin house of late President Anwar al-Sadat which was in 2019 turned into a museum for his belongings such as his bedroom, desk, tobacco pipe, and Mushaf (Muslim Holy Book).

The prime minister checked on the renovation of Saint Catherine Hospital which should be over by the end of the year. As such, the hospital will be ready to become part of the Universal Health Insurance System.

The hospital has 12 beds, four ICU beds, and five incubators. That is in addition to the emergency and reception department, seven outpatient clinics, a central pharmacy, blood test labs, scan labs, and five dialysis units.

Madbouli instructed the development of the city center by introducing shops and restaurants as currently it just has a football field and a mosque.

The prime minister headed to Saint Catherine Convent as the entrance and its surroundings are being developed. The first phase of the development works – including bazaars, checkpoints, the surveillance and security systems - is worth LE40 million, and finished by 80 percent.