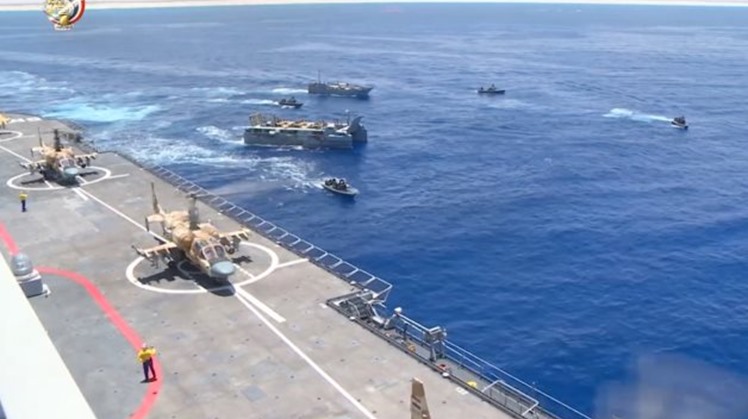 Sat, Jul. 11, 2020
CAIRO – 11 July 2020: Hasm 2020 maneuver continued Saturday in the face of foreign threats coming from Libya, with the Egyptian chief of staff witnessing an amphibious drill in the Western Desert against atypical surface targets, different marine artillery fire was opened on hostile submarines in their areas of operation using depth charge antisubmarine warfare weapon, forcing them to escape without any threat to the marine formation.

The drill was witnessed by Lieutenant General Mohamed Farid and other top generals in the Egyptian military, according to a statement by the military spokesperson.

Earlier, the operation began with a set of concentrated air strikes by multi-mission aircrafts on the enemy’s command centers while paratroopers secured the beach-head.

In conjunction with all these attacks, a group from the Thunderbolt Forces landed at the shore under a strong air cover and air defense protection, with the landing vehicles also arriving at the beach.

In the end of the drill, naval units launched harpoon and encapsulated harpoon missiles from the destroyers and submarines, while other aircrafts carried out a series of air strikes on hostile surface targets on the coast and securing the landing process.

The chief of staff inspected the forces that took over the beach-head and discussed their leaders the combat methods and the best methods to accomplish tasks in the shortest time possible with the least possible losses. He conveyed President Abdel Fatah al-Sisi and Minister of Defense Mohamed Zaki’s greetings and pride of the military’s efforts.

On Thursday, the military performed another maneuver in the framework of Hasm 2020 in the western military zone, including a training for the Air Force to face mercenaries of irregular armies and target their hotbeds. During the training, a number of helicopters raided and destroyed a hideout housing a number of mercenaries. Under the cover of artillery fire, the troops charged at hostile targets, and live ammunition was fired by military tanks.

Egypt shares a 1,200-kilometer border with Libya, and was previously attacked by terrorists who had infilitrated into the country from the long frontier. Those terrorists have largely either been killed in Egyptian strikes or arrested and executed.

In June, President Abdel Fatah al-Sisi inspected the Western Military Zone and said in a popular speech that the army has carried out undisclosed missions to secure the border.

"Be ready to accomplish any mission whether here within our borders or - if needed – beyond our borders," Sisi famously said, addressing the air forces, emphasizing that the Libyan cities of Jufrah and Sirte are "red lines" that Egypt will not allow mercenaries or foreigners to cross because they represent an important element of Egyptian national security.