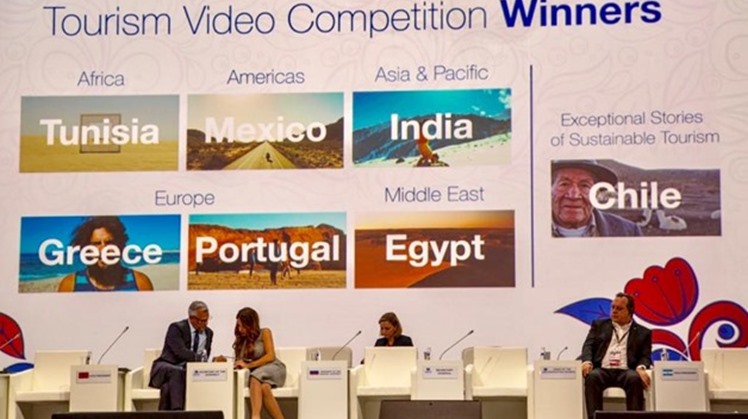 Last month, Egypt's Ministry of Tourism released the movie as part of the country’s campaign to promote for Tourism in Egypt and reform the whole sector.

The announcement came during the participation of Egypt’s Tourism Minister Rania al-Mashat at the the 23rd session meetings of the General Assembly of UNWTO. The meetings are taking place starting from September 9 until September 13 at Saint Petersburg city, in Russia.

Across an innovative mix of TV, digital and social media platforms, the Ministry of Tourism is launching a global tourism campaign to showcase the modern and dynamic face of the country with its abundance of experiences for travelers from all around the world, whatever their taste or budget, in addition to tapping on new source markets.

“The diversification of marketing and media platforms, a key pillar of the Egypt—Tourism Reform Program, contributes to the changing narrative of the sector.” said Mashat.

“We will work closely with our international partners to showcase our beautiful country to a wider range of audiences all over the world, with new innovative and competitive concepts of promotion, modern content and digital tools, highlighting the diversity of our destinations and authenticity of our traditions. And through the use of a data-driven approach we will create content tailored to audiences in various markets” added Rania Al-Mashat, the Minister of Tourism.

At the heart of the Ministry's International Marketing and Promotion Partnerships lie the three main components of the third pillar of the Egypt—Tourism Reform Program. They are “GEM2020”, promoting the opening of the Grand Egyptian Museum, the largest museum in the world dedicated to one civilization; “People to People” (P2P) campaign, which aims at portraying Egypt not only as a contemporary and prime touristic destination but also sheds light on the diversity and authenticity of the Egyptian people and “Branding by Destination”, creating an identity for each of Egypt’s unique destinations.

This is however, not the first time for Egypt to win this prize, as at the 22nd session of the General Assembly of the World Tourism Organization in China, Egypt won the award for the Best Tourism Promotional Video in the Middle East, among 63 nominated countries.

The Egyptian participant promotional film titled "This is Egypt", is a 1:20 minute movie that features mesmerizing scenes of the unique tourist attractions of Egypt, highlighting the diverse range of tourist activities available in Egypt and the different types of tourism that can be enjoyed; including cultural, leisure and marine tourism.

The launch of an Egyptian Antiquities exhibition in Prague: Discussion between Egypt's Council of Antiquities secretary general and the Czech ambassador Mon, May. 4, 2020

A foreign site highlights a Pharaonic woman who was buried with 6 canopic vessels Mon, May. 4, 2020