The Deputy Ruler of Sharjah honors the winners of the Sharjah Children's Book Fair, including Egyptians 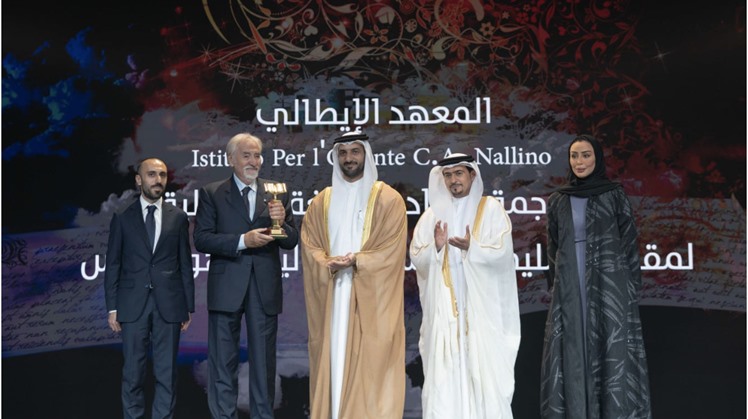 Wed, Nov. 2, 2022
Sheikh Sultan bin Ahmed bin Sultan Al Qasimi, Deputy Ruler of Sharjah, honored today, Wednesday, the winners of the Sharjah International Book Fair 2022, the Tarjuman Award, and the Etisalat Children’s Book Award, on the first day of the exhibition, which is organized by the Sharjah Book Authority at the Expo Center Sharjah, under Logo (word to the world).

The Deputy Ruler of Sharjah honored the Al-Sharq Institute - Carlo Alfonso Nellino, the Italian one, for the translation issued in Italian by Suleiman Al-Bustani’s introduction to Homer’s Iliad, the winner of the Turjuman Award, the largest translation award in the world, concerned with revitalizing the translation movement from the Arabic language, with a value of one million three hundred thousand dirhams.

At the Sharjah International Book Fair Awards, Sheikh Sultan bin Ahmed Al Qasimi honored the winners, who are: Writer Dr. Mashael Ibrahim Al Naboodah, winner of the Sharjah Prize for Best Emirati Book (in the field of novel) for her novel (Chronic Surgeon), and (in the field of studies). The writer Dr. Abdullah Sulaiman Al-Mughni for his book (Features of the UAE’s History through the Writings of Western Travelers and Politicians), while the award for the best Emirati book (in the field of literary creativity) went to the writer Sheikha Mubarak Saif Al-Nakhi for her book (And Those Days).

Kuwaiti writer Mona Al-Shammari won the “Best Arabic Book” award in the field of novel for her novel “The Maids of the Maqam,” while Penguin Random House Publishing won the “Best Foreign Fiction Book” award for the book “The Miniature Life - Revealing Miracles about the Microcosm.” (Best Non-fiction Foreign Book Award) South African writer Vathi Nesthenangela for her book (The Get You Two).

In terms of publishing house awards, it won the award (Best Local Publishing House) for the year 2022, Rewayat House - Emirates.

In the "Etisalat Prize for Children's Book", totaling 1.2 million dirhams, the prize for the (Early Childhood) category was won by the book "How do you feel today?" Written by Masara Toukan and illustrator Haya Halaw, published by Kalila and Dimna House, in Jordan. In the "Illustrated Book" category, the book "Kingdom of Antiquities" by Manar Hazaa, illustrator Basma Hossam, and Alia for Publishing and Distribution in Egypt won.

In the category (Book with Chapters), the book "Whisper of Trees" by Fay Musa and illustrator Fatima Madi, published by Asfar in the Kingdom of Saudi Arabia, won. In the category (Book of the Year for Young People), the book "I'm Starting Now" won, can you hear me? Written by Anas Abu Rahma, published by Dinason House in Palestine. The winner of this year's Comics category was withheld by a jury decision.

The award ceremony was attended by Sheikha Bodour bint Sultan Al Qasimi, President of the International Publishers Association, Ahmed bin Rakad Al Ameri, Chairman of the Sharjah Book Authority, Major General Saif Al Zari Al Shamsi, Commander-in-Chief of Sharjah Police, and Abdullah Sultan Al Owais, Chairman of the Sharjah Chamber of Commerce and Industry, along with the Deputy Ruler of Sharjah. Dr. Abdulaziz Al-Musallam, President of the Sharjah Institute for Heritage, Abdulaziz Tarim, Director General of Etisalat from e& in the Northern Emirates, and a number of officials, writers and intellectuals.