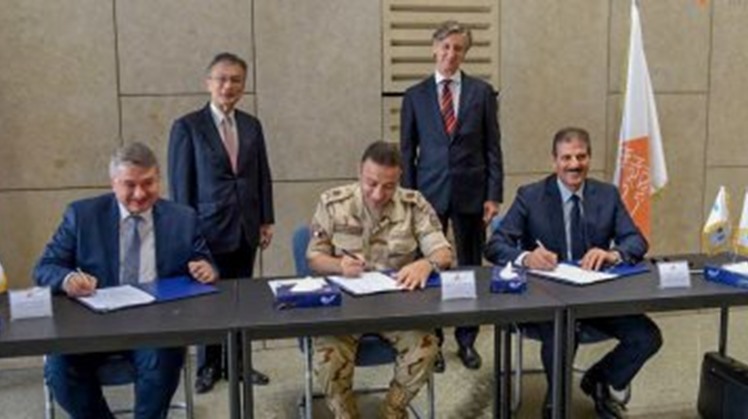 Wed, Nov. 2, 2022
The Grand Egyptian Museum, represented by Major General Eng. Atef Moftah, the Industrial Modernization Center, represented by Engineer Mohamed Abdel Karim, and the Electricity and Renewable Energy Authority at the Ministry of Electricity, represented by Dr. Ahmed Mahina, signed a cooperation agreement to implement a solar power plant, to be within the museum's buildings.

This came within the framework of the goals of the Sustainable Development Strategy and Egypt's Vision 2030; To maintain the ecological balance, encourage the transition towards a green economy, spread environmentally friendly practices, and use renewable energy sources that achieve sustainable development, especially the production of electricity from solar energy.

Major General Atef Moftah stated during the signing ceremony that the museum had taken into account the implementation of a strategy for sustainable development, and the integration of the environmental dimension in all its activities.

It also reviewed all efforts made to achieve sustainability goals, and the importance of using clean and renewable energy sources; In line with the museum's being environmentally friendly, especially in light of its obtaining the Gold Certificate for Green Building, and the Green Building Award, during the Arab Water Forum.

For his part, Engineer Mohamed Abdel Karim, Executive Director of the Industrial Modernization Center, said that the small grid-connected solar cell systems “Egypt-PV” implemented by the Industrial Modernization Center, in partnership with the United Nations Development Program, in addition to the inclusion of a grant provided by the Japanese government, and in cooperation with The Ministry of Electricity, where he said that the memorandum of understanding included discussing strengthening technical and financial support; To install a solar power plant in the Grand Egyptian Museum, as indicated by Dr. Ahmed Mahina, Head of the Strategic Planning Sector at the Ministry of Electricity and Renewable Energy, to the installation of the measurement system necessary to measure the performance indicators of the solar system, and the rates of electricity exchange, from the solar cell system to the electrical network and back, according to the competent distribution company; To measure savings and prepare reports on performance rates, within the framework of strengthening cooperation between state agencies; To achieve Egypt's Vision 2030.

The ceremony witnessed the presence of Oka Hiroshi, the Japanese ambassador in Cairo, Alessandro Fracasini, the resident representative of the United Nations Development Program, and a group of leaders and officials of the Grand Egyptian Museum, and the Ministry of Tourism and Antiquities.