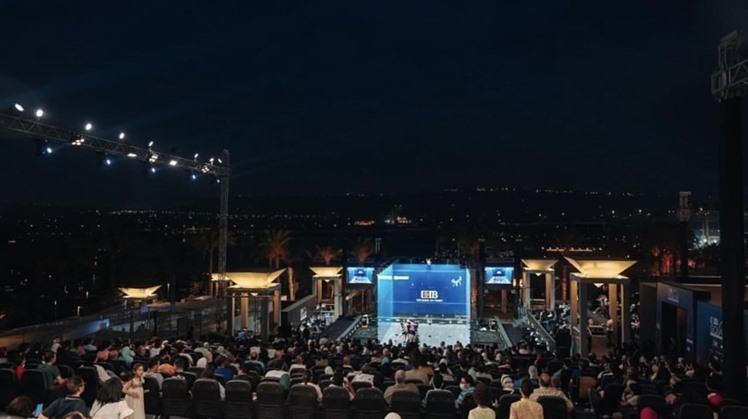 Tue, May. 24, 2022
Dr. Ashraf Sobhi, Minister of Youth and Sports, witnessed the conclusion of the World Squash Championship, which will be hosted by Egypt from May 13 to 22, on the glass court inside the National Museum of Civilization, in the presence of Dr. Assem Khalifa, President of the Egyptian Squash Federation, and Dr. Ahmed Ghoneim, CEO of the Museum Authority The National Council of Egyptian Civilization, Dr. Amr Al-Sunbati, President of Heliopolis Club, Hussein Abaza, CEO and Managing Director of the Commercial International Bank, and Maged Sherif, CEO and Managing Director of SODIC.

The Minister of Sports expressed his happiness with the arrival of Egyptian players to the final rounds of the tournament, stressing that the Egyptian players are firmly in control of squash, and they are still writing their names in the global squash sky.

Pointing out that the wonderful level that he showed during the tournament calls for pride for all the Egyptian players participating in the tournament, and an incentive for all the young players to achieve the impossible and reach the highest possible level for them.
While the Minister of Sports stressed that hosting the World Squash Championship in Egypt is a continuation of the series of Egyptian achievements in hosting the largest and most powerful international and international tournaments in the world, which came after a great effort and development of the sports infrastructure in Egypt, in addition to the development of a well-studied plan for the advancement of players in all different sports. For a decent representation in the name and international standing of Egypt, and for winning many titles and championships in which our sports heroes participate.

Ali Farag also managed to win the men's championship title, after defeating Marwan El Shorbagy, 2-3 in the sets, in a marathon match that lasted for 74 minutes.
Marwan Al-Shorbagy advanced in the first half with a score of 11-9, to return to Farag and adjust the result after winning the second half 8-11.
In the third set, Marwan Al-Shorbagy defeated Al-Shorbagy with a score of 11-7, and again beat Farag and won the fourth set with a score of 9-11.
The match reached a fifth and final set, in which the title was decided against Farag, with a score of 2-11, and he won the men's championship.
Thus, Nour El-Sherbiny and Ali Farag qualifies for the finals of the CIB PSA World Tour Championship, which will be hosted in Cairo next June, which brings together world champions and winners of all the Professional League tournaments.