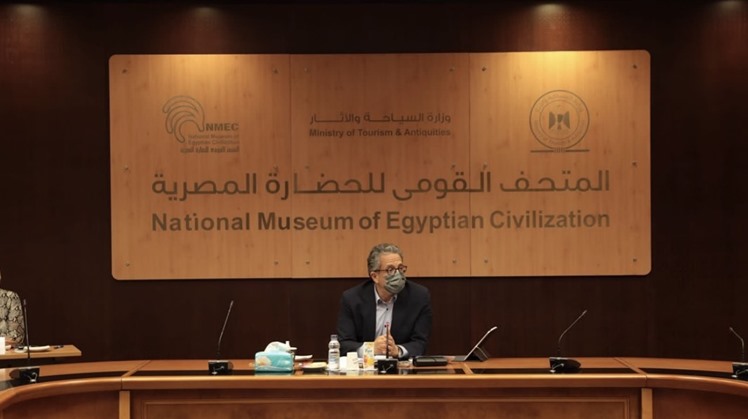 Tue, May. 24, 2022
Today, Dr. Khaled El-Anany, Minister of Tourism and Antiquities, chaired the meeting of the Board of Directors of the National Museum of Egyptian Civilization, in its first session, held after the opening of the Egyptian Textile Hall, at the Museum's headquarters in Fustat.

Dr. Khaled El-Anany began the meeting by welcoming the members of the Council, congratulating them on the opening of the Egyptian Textile Hall in the Museum on April 18, coinciding with the celebration of World Heritage Day. , describing it as one of the unprecedented achievements, wishing the museum further progress and the desired success for this great edifice.

During the meeting, Dr. Ahmed Ghoneim, CEO of the Museum Authority, reviewed a number of topics related to the museum’s revenues and the increasing demand for Egyptians and tourists to visit it, pointing out that there was a noticeable boom in the number of visitors during the past few months compared to the same period last year.

The CEO of the Museum Authority also briefed the Council on the most prominent tourist, artistic and cultural events and activities hosted by the museum during the last period, including a monologue show from Old Fat Loss, and the famous flamenco show in cooperation with the Spanish Embassy. The museum also hosted the closing ceremony of the World Squash Championship yesterday, in addition to The museum organized a number of workshops for various traditional and heritage crafts.

During the meeting, a number of topics that would develop the museum’s financial resources were discussed, in addition to discussing the possibility of establishing the Friends of the National Museum of Egyptian Civilization, similar to the Association of Friends of the Egyptian Museum in Tahrir, which is a non-profit civil association that works on developing the communities surrounding the museum.