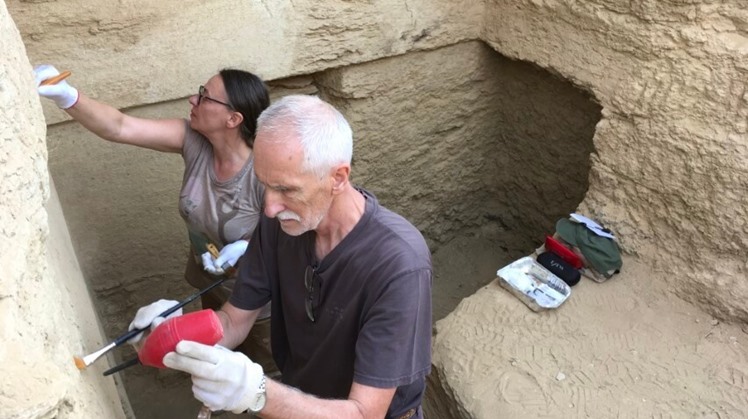 Sun, May. 22, 2022
Around 4300 years ago, an ancient Egyptian man who dealt with the secret documents of King Teti died in an unexpected way.

The crews hastily tried to decorate his burial site, but they did not finish the sacrificial carvings on the facade because time simply ran out. This is what the archaeologists think about the recently discovered pharaonic tomb at Saqqara.

Researchers at the University of Warsaw's Polish Center of Mediterranean Archeology said the unearthed tomb belonged to a man named Mehtjetju.

Hieroglyphs on the tomb indicate that Mehtjetju handled sealed royal documents, worked as a priest of King Teti’s mortuary cult, and as an inspector of the royal estate, according to a statement from the research team.

Archaeologists date this tomb, which was discovered near the Step Pyramid of King Djoser, to the time of the first pharaohs of the Sixth Dynasty, around 2300 BC.

Mehtjetju’s royal position would have given him enough social standing to employ an "exceptionally skilled hand" to build and decorate his burial place. According to the statement, the tomb's rocks were very fragile and required experts from the National Museum in Warsaw to immediately intervene and preserve it.

According to the Polish study, Mehtjetju lived sometime during the reigns of the first three rulers of the Sixth Dynasty: Teti, Userkare, and Pepi I.

CAption 1
Archaeologists have uncovered the tomb of a top ancient Egyptian official who had royal secrets (Image: Jaroslaw Dabrowski/Polish Centre of Mediterranean Archaeology, the University of Warsaw.)


"The elegance of the lines and the accuracy of the scientific modeling rival the best bas-reliefs on the tombs of kings," said the Polish archaeologists. However, the talented craftsmen who were employed to build Mehtjetju’s tomb did not have time to complete the carvings on the façade. They only made drawings in black ink on lime plaster, a kind of rough clouds for bas-reliefs depicting cows, oryx, and ibex.

Scientists plan to explore the interior of the tomb, which will likely include the burial chamber, and possibly the mummy of Mehtjetju, this fall.

"If he had not been buried there, it is likely that someone else had taken over the grave. The decoration was probably not completed because he died before the work was finished and was buried in a hastily completed tomb," says Kuraszkiewicz, one of the Polish researchers, according to Live Science.

It is not surprising that Mehtjetju was buried near King Djoser, whose Step Pyramid at Saqqara was the first of its kind. Years after Djoser's death around 2575 B.C., ancient Egyptian officials wanted their final resting place near the "important and revered king of the glorious past."