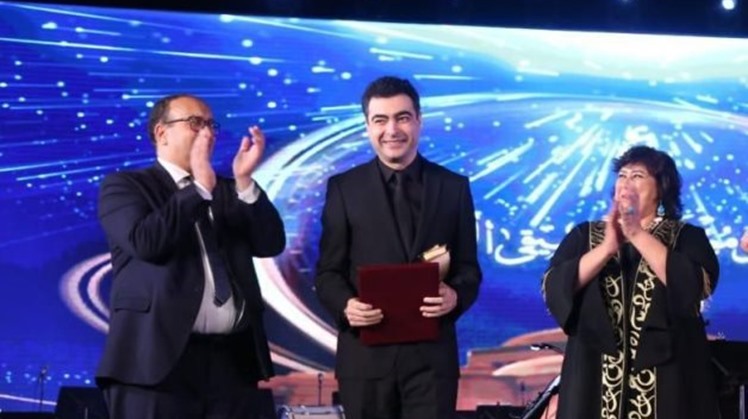 Sun, Nov. 7, 2021
At the opening of its 30th edition, the Arab Music Festival honored Egyptian music composer Hesham Nazih in recognition of his musical career for over 20 years, which includes composing music for the Pharaohs' Golden Parade ceremony celebrating the relocation of ancient Egyptian royal mummies from the Egyptian Museum.

The event was broadcast globally and won Nazih many Egyptian and international acclaim.

The opening ceremony was held at the Cairo Opera House’s Fountain Theater, in the presence of the festival’s guest of honor, Dr. Ines Abdeldayem, Minister of Culture of Egypt.

The ceremony also witnessed the honoring of several artists and researchers in various artistic fields in Egypt and across several Arab countries.

It’s worth mentioning that this edition of the festival was dedicated to the two great late musicians Gamal Salamaand Abdo Dagher, who passed away this year, where the opening ceremony presented a selection of their musical compositions.

Hesham Nazih is an Egyptian music composer who introduced more than 40 works varying between TV series and cinematic blockbusters, working with key directors within the Egyptian film industry. Hesham received a plethora of awards for many of his works, most notably receiving the Faten Hamama Excellence Award from the Cairo International Film Festival (CIFF) in 2018, marking the first composer to receive this award.

Hesham began his artistic career composing the score of Hysteria (1998), followed by his breakthrough through El Sellem Wel Te'ban (2001) by Tarek Alarian. The success of the film’s music propelled its release in an independent album using compositions from the film’s music, one of a few albums with dramatic music to be released commercially across the Arab world. In the same year, he collaborated with director Radwan El-Kashef in Al Saher (The Magician) (2001), then Sahar El Laiali (Sleepless Nights) (2003), and the following year he collaborated again with Tarek Alarian in the action film Tito (2004),then in Aswar al-Qamar (The Walls of the Moon) (2015) and Welad Rizk (Sons of Rizk) film series (2015/2019).

Nazih is best known for his distinguished style that reflects the multicultural layers in his melodies making them rich and authentic. This is evident through his works that include The Treasure film series (2017/2019) by Sherif Arafa, Ibrahim L'Abyad (2009), The Originals (2017) by Marwan Hamed, with whom he worked on The Blue Elephant (2014), and Blue Elephant: Dark Whispers(2019), achieving tremendous successes and became quite memorable to audiences. His latest film is Al Arefthat topped the 2021 Egyptian box office revenues locally and in the Arab world.

In the TV industry, he composed the music for Sharbat Louz (2012), Elsabaa Wasaya (The Seven Commandments) (2014), and Khaled Marei’s Al Ahd: Al Kalam Al Mubah (The Covenant) (2015), and Mohamed Yassin’s Afrah AlQoba (Celebrations of Al-Qobba)(2016). At the beginning of 2020, Hesham introduced Shahid.net’s first original Egyptian series Fi Kol Osbu’ Yowm Goma’a, which marks his first work to be screened on a digital platform