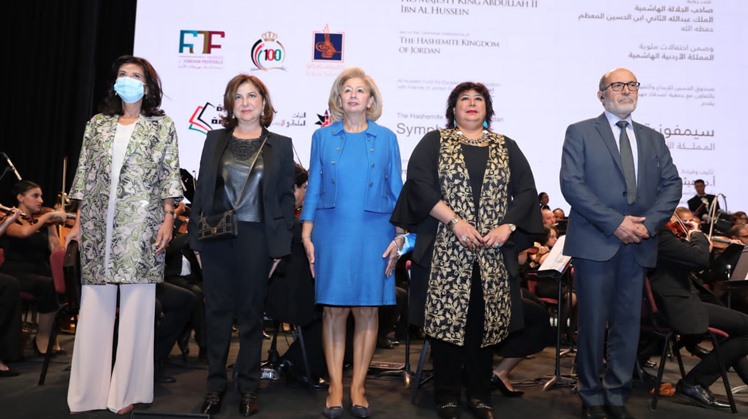 Wed, Oct. 13, 2021
Under the patronage of King Abdullah II of Jordan, and on his behalf, Haifa Al-Najjar, Minister of Culture of Jordan, and Dr. Enas Abdel Dayem, Minister of Culture of Egypt, witnessed the celebration held on the occasion of the centenary of the establishment of the Hashemite Kingdom of Jordan and organized by the Hussein Fund for Creativity and Excellence, in cooperation with the Association of Friends of Jordan Festivals, and revived by the Cairo Orchestra Symphony with the participation of the National Institute of Music Orchestra with singer Ghada Abbasi, led by musician Dr. Haitham Sukkarieh, at the Palace of Culture in Al Hussein Youth City, in the presence of Sherif Kamel, Ambassador of Egypt to Jordan, a number of princes, ambassadors, members of the Egyptian Embassy, ​​Hazza Al Barari, Secretary General of the Jordanian Ministry of Culture, and a group of political figures and the general public in Jordan.


The Minister of Culture, Dr. Enas Abdel-Dayem, congratulated Jordan and its people, and confirmed her pride in the Egyptian presence in the celebration of the centenary of the kingdom's founding. She pointed out that the participation of the symphony orchestra on this occasion is a nucleus for strengthening cooperation with brothers in various fields of creativity, given that soft forces are one of the most important means of communication between peoples.

For her part, Haifa Al-Najjar thanked Egypt and Dr. Enas Abdel Dayem, Minister of Culture, for participating in the celebration of the centenary of the establishment of the Kingdom. The kingdom.

The Cairo Symphony Orchestra, with the participation of the National Institute of Music Orchestra and the young singer Ghada Abbasi, led by musician Dr. Haitham Sukkarieh, presented a symphony entitled "The Hashemite Kingdom of Jordan.. Your Love Amman", written by the concert leader and words by Ali Al-Batiri. It tells the story of Jordan through multiple axes and visualizes the establishment of the state. Jordan and its fabric coexist with its various spectrums, through which Jordanian folk melodies are used as constructive ideas and significant melodies. Before assuming power and portraying the Jordanian weddings through the Jordanian wedding, in which melodic models are presented from the various regions of the Kingdom, northern, southern, rural, Bedouin, Palestinian, Levantine and Circassian origins, embodying Jordan’s march, progress and prosperity in various scientific, economic, educational, urban renaissance and other fields. To five movements: the Great Arab Revolt, the birth of Amir Hashemi, and the Jordanian wedding. The Elegy of Hussein and the New Dawn.

The delegate of King Abdullah II, Haifa Al-Najjar, the Jordanian Minister of Culture, was keen to present the honorary shield to Dr. Enas Abdel-Dayem, the Minister of Culture, in appreciation of the distinguished participation of the Cairo Symphony Orchestra in the celebration of the Queen’s Centennial. The musician Haitham Sukkarieh also received the honorary shield and Dr. Ali Yaghi and Director General of the Hussein Fund for Creativity and Excellence.