The start of the artistic concert at the Egyptian Opera House, in the presence of the Tunisian president and the Minister of Culture. 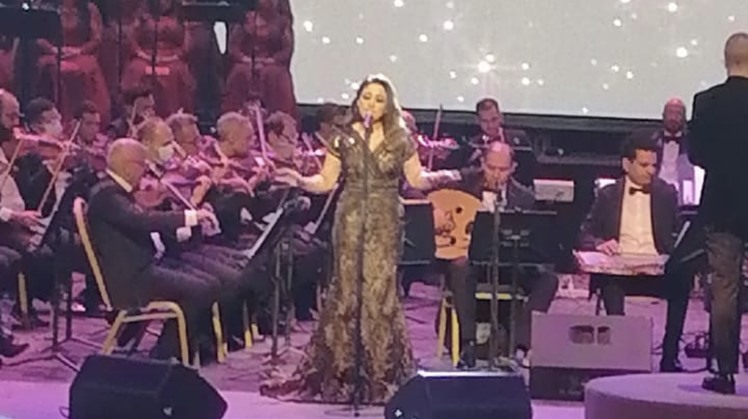 Sun, Apr. 11, 2021
A short time ago, the artistic concert was launched at the Egyptian Opera House, in the presence of Tunisian President Qais Said and Minister of Culture Inas Abdel Dayem. The concert was presented by Jasmin Taha Zaki, and Lotfi Bouchnak presents several songs, most notably We Sing To Live. This is a song for them. Brown, and Reham Abdel Hakim introduces A Thousand and One Nights, Al Remal.

The ceremony comes on the occasion of the announcement by President Abdel-Fattah El-Sisi, President of the Republic, and his Tunisian counterpart, Qais Said, 2021-2022, of the Egyptian-Tunisian culture.

The ceremony was greeted by the great singer Lotfi Bouchnak and Reham Abdel Hakim, accompanied by the Arab Nationalist Band for Music led by Maestro Dr. Mostafa Helmy.

The ceremony was witnessed by the delegation accompanying the Tunisian president, members of the Tunisian diplomatic mission and the Tunisian community in Cairo, and was attended by a number of media professionals, Egyptian and Arab radio networks and satellite channels, and international news agencies.

It is noteworthy that President Abdel Fattah El-Sisi, President of the Republic, in agreement with his Tunisian counterpart, Qais Said, declared 2021-2022 years of Egyptian-Tunisian culture, and immediately the Egyptian Ministry of Culture began preparing an agenda for creative, reciprocal activities that included many intellectual, artistic and diverse activities that embody the depth of relations and common ties between The two brotherly peoples, and it expresses the communication between them through extended decades.